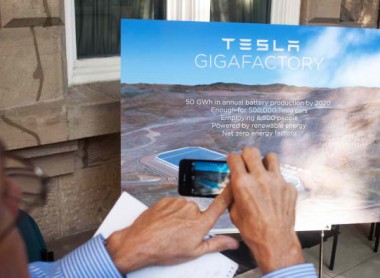 Last October 2015, the world was shocked when the natural gas reservoir in Aliso Canyon ruptured, making it one of the worst catastrophes in the United States. In response to this matter, the US government has no options but to support the rise of Tesla Motors as it won the bid for building a power storage facility in Southern California.

A number of major tech companies are supposedly in the talks of purchasing the floundering Twitter.

Apple's iMac 2016, beyond the limits of modern technology

At the very moment IMac 2016 was introduced, rumours become rampant while buyers expect new and advanced features from one of the world's leading company, Apple.

Looking for torrent? Here's the top 6 best torrent sites in 2016

If you are frustrated on the latest news of hacker invasions over Kat, Kickass and The Pirate Bay torrent sites, it is time to move out from your comfort zone and try something new.

Regular torrent clients must be alarmed for cyber criminals find a new way to infiltrate the said site through spreading malware using popular downloads. Audio, video and other innocent torrent files received an attempt to infect more cyber victims that have yet no idea.

AMD’s Radeon RX 490 graphics card has been floated around to hit the market before 2016 ends. Given that this motherboard partner will be providing a gaming performance at the highest resolution level, it is likely that the chip will be out during the first half of 2017 at the earliest.

The Chinese hacking group Pangu has been on the move to come up with a jailbreaking tool for Apple’s newest iOS. In order the check this activity and confuse the hackers, the tech giant has released the Golden Master edition which is technically iOS 10.0.1.

The sales of Apple’s iPhone 7 are expected to rise given the disaster brought about by exploding Samsung Galaxy Note 7.

Samsung is yet to release its new package but speculations about its Galaxy S8 unit are already rushing in.

Apple Watch 2 to be launched with iPhone 7

Very much like iPhone 7, the launching of Apple Watch 2 is highly anticipated. It's been two years since the first generation time gadget was released in the market.

For years, threats of a looming shortage in cocoa beans will result in a global crisis involving chocolate products. According to Bloomberg, the world has consumed around 70,000 metric tons more cocoa than farmers produced in 2013.

Instead of Zika-carrying mosquitoes, around 2.4 million honeybees were killed in South Carolina in the government's bid to prevent the proliferation of infection carrier Aedes Aegypti mosquito in the area.

Facebook founder Mark Zuckerberg surprised the Nigerian tech communities when he made an unannounced visit to the country's Co-Creation Hub (CcHUB) recently.

Warren Buffett turned 86 on Tuesday with reports estimate that the multi-billionaire tycoon made a $2 million daily earnings since the day he was born.

Does Google Wants to Take on Uber With Ride Sharing App Waze?

Uber Might Not be in Immediate Danger of Stiff Compeition