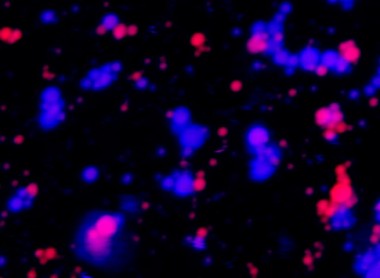 Scientists Ask: How Can Liquid Organelles In Cells Coexist Without Merging?

BUFFALO, N.Y. -- New research may help to explain an intriguing phenomenon inside human cells: how wall-less liquid organelles are able to coexist as separate entities instead of just merging together.

NASA Gives Typhoon Lekima a Twice-Over with the Aqua Satellite

NASA's Aqua satellite provided infrared and visible views of Typhoon Lekima as it was approaching landfall in China. China has posted Typhoon and Heavy Rain Warnings for Lekima.

Something odd happened in the oceans in the early 20th century. The North Atlantic and Northeast Pacific appeared to warm twice as much as the global average while the Northwest Pacific cooled over several decades.

A scientific approach has been used to re-identify huge birds etched into the desert plains of southern Peru around 2,000 years ago. The birds appear to be exotic to the region and further studies could help explain their significance. The study is published in the Journal of Archaeological Science: Reports.

Over the past four years, an instrument attached to a telescope in the Chilean Andes - known as the Gemini Planet Imager - has set its gaze on 531 stars in search of new planets. The team, led by Stanford University, is now releasing initial findings from the first half of the survey, published June 12 in The Astronomical Journal.

Measuring Methane From Coal and Gas in Pennsylvania Informative

While methane pollution caused by natural gas production in Pennsylvania is underestimated by the U.S. Environmental Protection Agency, natural gas still has half the carbon footprint of underground coal mining, according to an international team of researchers.

Boulder, Colo., USA: Earth is bombarded every year by rocky debris, but the rate of incoming meteorites can change over time. Finding enough meteorites scattered on the planet's surface can be challenging, especially if you are interested in reconstructing how frequently they land. Now, researchers have uncovered a wealth of well-preserved meteorites that allowed them to reconstruct the rate of falling meteorites over the past two million years.

An experiment conducted in Brazil in an area of Atlantic Rainforest suggests that intensive silviculture, including the use of herbicide and substantial amounts of fertilizer, is a more effective approach to promoting the regeneration of tropical forest and biomass gain than the traditional method based on manual weeding and less fertilizer.

The irregular galaxy NGC 4485 shows all the signs of having been involved in a hit-and-run accident with a bypassing galaxy. Rather than destroying the galaxy, the chance encounter is spawning a new generation of stars, and presumably planets.

Small, Hardy Planets Most Likely to Survive Death of Their Stars

Small, hardy planets packed with dense elements have the best chance of avoiding being crushed and swallowed up when their host star dies, new research from the University of Warwick has found.

An enormous volcanic eruption on Iceland in 1783-84 did not cause an extreme summer heat wave in Europe. But, as Benjamin Franklin speculated, the eruption triggered an unusually cold winter, according to a Rutgers-led study.

The Moon is Quaking as It Shrinks

A 2010 analysis of imagery from NASA's Lunar Reconnaissance Orbiter (LRO) found that the moon shriveled like a raisin as its interior cooled, leaving behind thousands of cliffs called thrust faults on the moon's surface.

WASHINGTON, D.C. May 1, 2019 - Back in 2013, Timothy Koeth, an associate research professor at the University of Maryland, received a rather extraordinary birthday gift: a little cloth lunch pouch containing a small object wrapped in brown paper towels.