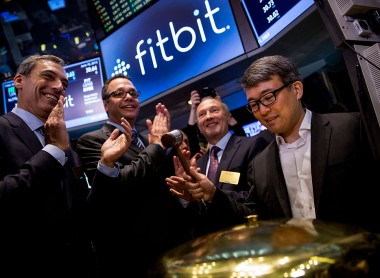 As the company posts impressive sales figures of its flagship device, the Fitbit Blaze, CEO James Park says that its rival, the Apple Watch, simply tries to do too much.

Age of Ads Over? Microsoft Edge To Offer Ad-Free Browsing In The Near Future

Microsoft announced that the Edge Browser's future updates would include a native ad blocker. Is the age of pop up ads coming to an end?

AT&T is boosting data caps for home broadband plans, but increasing enforcement along with it.

Chinese tech giant Foxconn has given Japanese firm Sharp its final offer for an acquisition after months of the deal going on and off.

Yahoo, led by CEO Marissa Mayer, has reportedly sent a letter to prospective buyers of the company's core Internet businesses, stating that the bids for the company's offerings must be submitted by April 11.

The Federal Bureau of Investigation announced that it was able to successfully hack the iPhone of a suspected terrorist without any help from Apple.

NTT Data Corp., the firm which used to hold the monopoly on telecommunications in Japan, announced that it has agreed to buy Dell Inc's IT services unit for $3 billion.

Why Netflix's Video Throttling Is Not A Bad Thing For Consumers

Netflix has incited controversy for revealing that it has been throttling videos for mobile streaming for years. Here's why this is not such a bad thing.

Sources have claimed that Microsoft is currently in talks with investors over a possible acquisition of prominent Internet firm Yahoo! Inc.

McDonald's isn't lovin' it's old slogan and wants a new one. Soon people around the U.S. may soon hear "The Simpler the Better," a slogan focused on the chain's drive for a simpler menu.javascript:;

Washington, D.C. is set to become a victim of its unique status once again. This time, due to district and nearby areas being classified as a no-drone zone, residents can expect to not get drone delivery at the same time as the rest of the nation.

Toyota showed its dedication to its Prius lineup with the debut of the 2017 Prius Prime plug-in hybrid Wednesday at the 2016 New York Auto Show.

In its first foray into the virtual reality market, streaming service Hulu has launched its first app specifically designed for the Samsung Gear VR.

Netflix announced that it has been throttling the video speeds of its customers who use AT&T and Verizon. The company maintains that it was all to protect its customers.