US, South Korea Reaffirm Commitment Toward Denuclearization of Korean Peninsula

US Secretary of State Antony Blinken and South Korean Foreign Minister Chung Eui-Yong reiterated their nations' and Japan's commitment to "denuclearization of the Korean Peninsula." 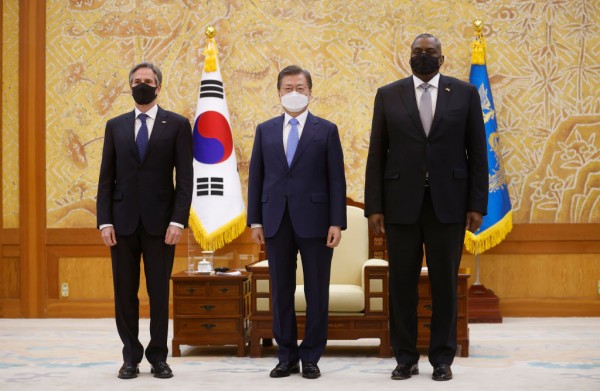 In a published article last March in a local news media Arirang News, South Korea, and the United States emphasized in a joint statement issued after the "two plus two" summit of senior diplomats and defense leaders from Seoul and Washington that North Korea's nuclear and ballistic missile challenges remain a high concern.

According to a published article in Kyodo News, The officials agreed to continue fully coordinating and maintaining high-level meetings on the current policy review, reaffirming a shared commitment to confronting and resolving North Korean nuclear and ballistic missile challenges.

Blinken said at a joint news conference after the discussions that Biden intends to finish the work "in the weeks ahead" while maintaining "tight coordination and consultation" with South Korea and Japan, among others.

Meanwhile, according to his spokesperson Kang Min Seok, South Korean President Moon Jae In pledged to continue efforts to repair ties with Japan at a meeting with senior US officials later in the day at the presidential office.

Reaffirming the Commitment During the G7 Summit

According to the State Department, US Secretary of State Antony Blinken and South Korean Foreign Minister Chung Eui-Yong reiterated their nations' and Japan's commitment to "denuclearization of the Korean Peninsula."

In a published article in Reuters, the statement, published after the two met on the margins of a Group of Seven meeting, refers to efforts that have made little or no progress in convincing Pyongyang to give up its nuclear weapons without identifying North Korea.

Blinken and Chung also emphasized the significance of multilateral collaboration in addressing other regional concerns, "particularly the restoration of the people of Burma to the road to democracy," according to the statement, alluding to a military coup in Myanmar earlier this year.

The United States has emphasized the significance of trilateral defense cooperation in the face of newly emerging security concerns on several occasions. The South Korean military ministry stated that we will continue to participate in high-level discussions between Seoul, Washington, and Tokyo.

While condemning China of "aggressive and authoritarian conduct" that threatens Indo-Pacific stability, the U.S. Secretary of State indicated that collaboration with Beijing on North Korea concerns would continue.

The U.S, Secretary of State said "Beijing has an interest, a clear self-interest in helping to pursue the denuclearization of the DPRK because it is a source of instability, it's a source of danger and obviously a threat to us and our partners," according to a published article in Arirang News.