Los Angeles Clippers star players Kawhi Leonard and Paul George made sure to secure Game 7 against the Dallas Mavericks. 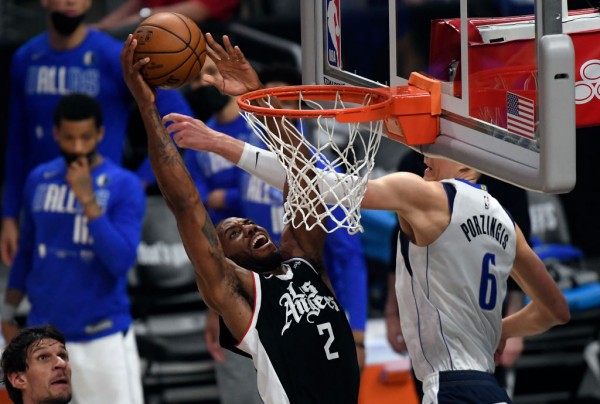 (Photo : Kevork Djansezian/Getty Images)
Kawhi Leonard #2 of the Los Angeles Clippers dunks the ball against Kristaps Porzingis #6 of the Dallas Mavericks during the second half of Game Seven of the Western Conference first round series at Staples Center.

Showing why he is considered one of the best NBA players of his generation, Luka Doncic was able to uplift his team until the playoffs round. But Doncic fell short after Kawhi Leonard and Paul George from Los Angeles Clippers dominated the game, according to a published report in the USA Today.

Tim Hardaway Jr. missed much of the game due to a right ankle ailment, shooting just 5-for-14 overall and 1-for-9 from outside the arc. Doncic did not have as much assistance as Leonard and George, but it did not deter him from playing his game, according to Sports Yahoo.

Read Also: Lebron James Likely to Return to the Court Against the Knicks

The Clippers avoided a post-season collapse

The Clippers have said that they are a different club from last year's championship-contending group, which fell short with a second-round defeat. They fired Doc Rivers and appointed Ty Lue to head coach in the hopes that a fresh voice and fresh X's and O's would lead to improved accountability.

The Clippers embarked on a 24-2 run after Dallas built an 81-76 lead halfway through the third quarter. Even when Dallas seemed to be regaining ground, the Clippers would not relent. After Dallas narrowed the Clippers' lead to 114-107 with 2:07 remaining, Jackson and Morris St. hit two consecutive 3-pointers to seal the game.

The Clippers answered with a 24-4 run, including 12 in a row, to take a 100-85 lead into the fourth quarter. Morris nailed three 3-pointers, while Kennard added two. Leonard scored seven points, including a slam off a feed from George.

Defensively, Leonard made a tremendous block, while Mann assisted in containing Doncic, who got the Mavericks' lone points at the conclusion of the third, according to a published report in The Salt Lake.

The Los Angeles Clippers will face the Utah Jazz

The Clippers will face the top-seeded Utah Jazz in the Western Conference semifinals beginning on Tuesday, according to a published article in ESPN.

It can be remembered that the Clippers blew a 3-1 second-round series lead to the Denver Nuggets less than a year ago. For the first time in the first-round series, the home team won a game. This is now the chance for the Los Angeles Clippers to make a buzz in L.A. after the Lakers were defeated during Game 6 against Phoenix Suns.

At the Staples Center, the Lakers won 11 of their 17 NBA titles. They have also had some of the top players in NBA history.