Lebron James Likely to Return to the Court Against the Knicks 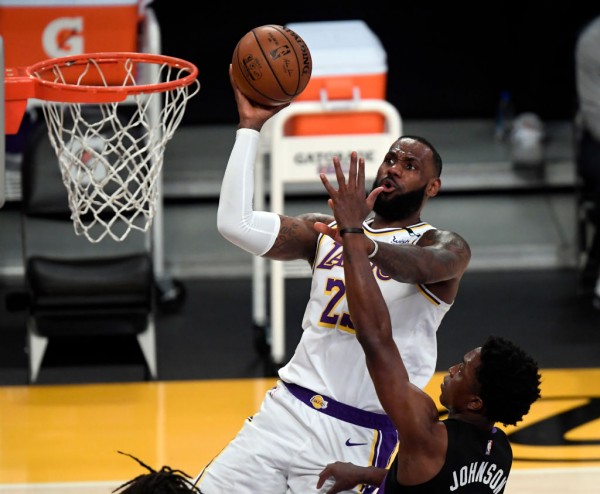 (Photo : Kevork Djansezian/Getty Images)
LeBron James #23 of the Los Angeles Lakers scores a basket against Stanley Johnson #5 of the Toronto Raptors during the first half at Staples Center.

Lebron James, who visited an ankle doctor last week and missed 24 of the Lakers' last 26 games due to a high ankle sprain, is said to be doing well in workouts and has a specific return date.

According to a recently published article in ESPN Sports News, Lebron James is more likely to play on Tuesday. Meanwhile, Lakers coach Frank Vogel said Monday that James was a complete participant in practice but did not confirm his status for Tuesday's game.

Vogel said that Lebron James did some drills and short and full scrimmages. In a recently published report in Clutch Points, James missed six weeks due to a high right ankle sprain, and he returned for two games against Toronto and Sacramento. He then sat for the next four games to rest his ankle.

In a published article in Silver Screen, In a status report issued Monday evening, the Lakers classified James as out for Tuesday's game. This means that it is still not clear if James will appear in court or not.

However, it can be remembered that the last two times that Lebron James was listed as "Out" due to an injury was in January 2019 and an ankle sprain earlier this season. At that time, James was listed as out but only changed his status during the game day.

Los Angeles Lakers Marc Gasol said that Lebron James did some short and long scrimmages. Gasol added that "He's around. He's been doing basketball stuff. He was shooting the ball a couple of times today," according to a report in ESPN.

Meanwhile, his co-star player Anthony Davis also said Lebron James is doing well during the practice game. Davis also added to trust him that Lebron James will be back on the court and have the same confidence. This is primarily because James has been in the league for a long while.

Caldwell-Pope also said that Lebron James would be ready during the Play-offs. He also added that he has seen Lebron James doing his normal routines like shooting the ball, dunking, and most of all, his workouts.

Returning against the Knicks would allow James four games to get his knees back under him, while returning against the Rockets would only give him three. The Lakers will have their 16th session of the season on Monday, which is another sign of hope. They rarely train for just one day in between practices, but this seems to be an attempt to get James on the field with his teammates.