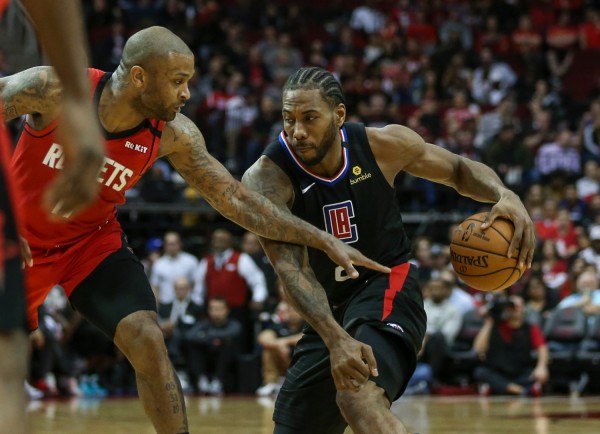 HOUSTON - No long bombs were witnessed in Toyota Center as the Los Angeles Clippers wrecked the Houston Rockets as they bounded the 'small ball' line up to 7 for 42 in the arc, 120-105.

"The Klaw" Kawhi Leonard drove the Clippers to a victory dropping 25 points, six rebounds, five assists, two steals, and a block alongside Montrezl Harrell who forced 19 points and grabbed 10 rebounds denying Russell Westbrook's 29 point production as the Clippers' shuts down James Harden beyond the arc forcing him to earn most of his 16 points in the foul line as the Clippers runs with a victory.

Rockets opened the 1st quarter penetrating the paint as they lead 4-2 but "The Klaw" buried a triple to regain the lead and drained his usual mid-range game to give Clippers an early lead but James Harden attacked the shaded area to stay close in the game with Jeff Green who nailed five quick points to cut the lead to single-digit but the Clippers' newly acquired Reggie Jackson drop a three as Lou Williams dishes a foul to Jeff Green in the three-point line to get the early momentum as they finished the quarter with eight assists on 12 Field goals to secure the 10 point lead, 33-23.

The Clippers' domination continued as Montrezl Harrell made his presence felt in the paint bulldozing the 'small Rockets defense' extending the lead to 14. But Russell Westbrook ended the drought for the Rockets with a spin cycle plus an and-one. The Clippers continues the shooting barrage as Kawhi answers the Rockets' run with Clippers' displaying dominant performance on both ends of the floor with a 17-2 run. Marcus Morris strips James Harden and drills a corner three forcing Mike D'antonni to call a timeout but despite the cease-fire called by the Rockets' coach Harden continued to struggle on the arc and even at the foul line allowing Kawhi Leonard to stretch the lead to 23 to end the first half, 67-44.

Despite the 23 point deficit, Westbrook continued his intensity to cut the lead but Kawhi rejected the run by posterizing Robert Covington plus an and one, as the Rockets' continue to struggle James Harden found himself open for a fastbreak. But the streaking Patrick Beverly denied a possible and one for "The Beard" which resulted to a Flagrant foul one causing two free throws plus a possession. However, it did not spark the Rockets' offense as James Harden still zero on the three-point territory out of seven attempts while Harrell continues to work in the paint ending the third with 25 point lead, 90-65.

Opening the fourth is a put back from Paul George coming from a Harrell's miss but Russell Westbrook single-handedly launch the Rockets final push. It is just short as Patrick Beverly knocked down a triple denying the possible run as Kawhi drained another long bomb before sitting out as the Clippers' bench continued the hot shooting. Despite the effort of Jeff Green knocking down triples in the final minutes and dropping 17 points in the game, the lead is too much for the Rockets to have their comeback as the Clippers seal the victory in the Toyota Center, 120-105.