Pres. Joe Biden returned to the House of Congress to deliver his first address to the joint session to make the case that the Government is back. 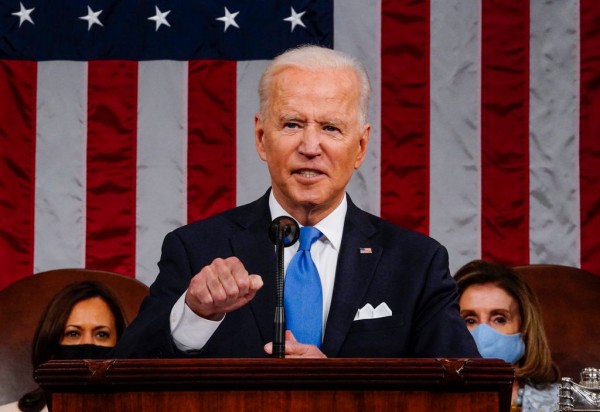 Biden Delivered His First Address in a Joint Session in Congress

President Joe Biden returned to the United States Capitol on Wednesday, his home for more than three decades, and used his first speech to Congress to argue that the age of large government is back, according to a recently published article on MSN News.

Pres. Biden said that the country is on the move again following a deadly pandemic that killed over 570,000 Americans, devastated the economy, and rocked everyday life. And he outlined a wide - and costly - plan to repair the nation's highways, bridges, water pipes, and other facilities, as well as to improve public education and extend a slew of other benefits.

Read Also: McConnell Accuses Biden of Breaking His Commitment To Unify the Country

Biden Touts Achievements of His Administration

In a published article on CNBC News, here are some of the takeaways of Biden's speech:

It is perhaps unsurprising for an administration that has made containing the pandemic and putting Americans back to work the primary goals. Biden used the phrase "jobs" 43 times in his speech.

Biden noted that the country had added 1.3 million new jobs in the first three months of his term, which is more than every other president's first 100 days. But he soon shifted his focus to the need to enact his American Jobs Plan if the nation is to maintain momentum and return to the record low levels of unemployment that existed before the pandemic.

2. America Is On the Move Again

When Biden assumed office, he declared that "America's house was on fire," referring to the catastrophic COVID-19 pandemic, its devastating economic effects, and the Jan. 6 insurgency at the Capitol, according to a published article in Hindustantimes.

Biden said "Now - after just 100 days - I can report to the nation: America is on the move again. Turning peril into possibility. Crisis into opportunity. Setback into strength."

It is the president's tried-and-true tactic to claim credit for the more optimistic moment when coronavirus vaccines have offered a way out of the pandemic. Republicans, on the other hand, made it known that they had a different perspective, with Sen. Tim Scott, R-S.C., indirectly crediting former President Donald Trump with Biden's good fortune.

Presidents from both sides have used common addresses in the past to discuss the boundaries of democracy. Biden took the opposite approach, emphasizing the part that Washington would play in changing people's lives.

The president ticked off specifics of his $1.8 trillion budget package, which included expanding childcare, creating a nationwide maternity and medical leave scheme, distributing child care subsidies, and other initiatives. This initiative is in addition to his budget for $2.3 trillion in capital funding to repair highways and bridges, improve internet coverage, and initiate other programs.

A week after former Minneapolis police officer Derek Chauvin was charged in the death of George Floyd, and while the country continues to deal with a disproportionate number of Black men being killed by police, Biden urged Congress to act.

Biden said, "We have all seen the knee of injustice on the neck of Black America. Now is our opportunity to make real progress."

Biden, who secured the presidency with heavy Black voter support, has asked Congress to give him a police justice bill named after Floyd by the 25th anniversary of his assassination, May 25. He went on to state that he wanted to eliminate structural inequality in employment, education, and public health.

Related Article: Side Effects After Vaccination Could Mean You Already Got Infected, New Study Suggests