Facebook Steps Down from Australia News Ban After Law Compromise

Facebook Inc. stepped down from the news ban in Australia after the government decided to change world-first legislation forcing the tech giant and Google to pay local publishers for content. 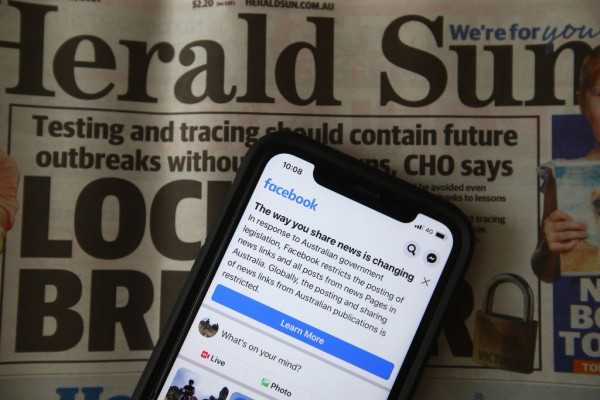 (Photo : Robert Cianflone/Getty Images)
MELBOURNE, AUSTRALIA - FEBRUARY 18: In this photo illustration a message is seen on Facebook mobile, on February 18, 2021 in Melbourne, Australia. Facebook has banned publishers and users in Australia from posting and sharing news content as the Australian government prepares to pass laws that will require social media companies to pay news publishers for sharing or using content on their platforms.

In reaction to the proposed legislation, the social-media site turned off news sharing in Australia last week. Mark Zuckerberg and government officials were locked in talks to find a solution, as per Bloomberg on MSN. Among fundamental changes, the Australian government said Tuesday that before deciding if they are subject to the bill, it would take into commercial account deals reached by Google and Facebook with news companies and give them a month's notice.

As jurisdictions worldwide reel in the Silicon Valley juggernauts, the law set to reach parliament this week has made Australia a testing ground for digital-platform control. Josh Frydenberg, Australian Treasurer, said Tuesday that Facebook has now re-engaged with news publishers and reached commercial agreements.

Hours after the deal was unfurled, Australia's Seven West Media Ltd. simultaneously announced that it had signed a letter of intent without elaborating on financial arrangements to supply Facebook with content. The tech giant claims restrictions on sharing news will be lifted "in the coming days."

Meanwhile, William Easton, managing director for Facebook Australia & New Zealand, said in a statement that they are satisfied that the Australian government agreed to several changes and guarantees addressing their core concerns.

After days of one-on-one talks with Facebook CEO Mark Zuckerberg, Australian Treasurer Josh Frydenberg revealed the news. According to Daily Mail, Frydenberg painted it as a win and claimed the social media giant had decided to make agreements with publishers.

In exchange, Frydenberg announced significant improvements to the legislation due to be passed last week, which would make it much easier for Facebook to enter into agreements on its terms - which could mean that the current laws will entirely cease to extend the website.

Ministers also seem to have told Facebook that they would pick which news outlets do and do not feature on their website - potentially encouraging the web to ban businesses pushing for cheaper rates, significantly undermining their negotiation stance. As the UK, EU, and US both decide whether to pass similar laws, the compromises would have global implications, but it will now be far more challenging to move beyond Australia's example set.

The government's aim was for the code to serve as an opportunity for tech companies to enter into agreements without government interference with media providers. On Tuesday evening, Seven West Media Chairman Kerry Stokes revealed that the organization had signed a letter of agreement with Facebook to include its news content.

According to the Sydney Morning Herald, Industry and government sources said that Nine had restarted Facebook talks. News Corp and the Guardian Australia also revived the talks with the social media giant.