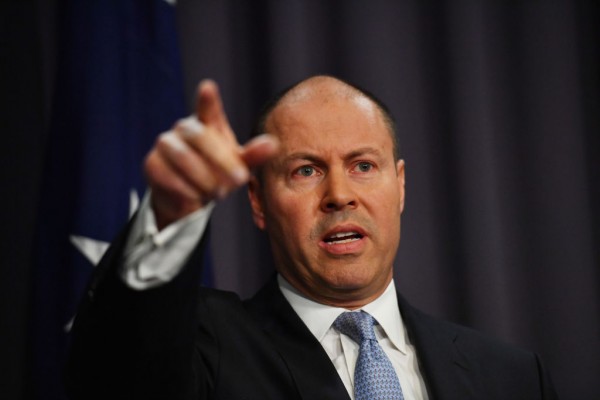 (Photo : Sam Mooy/Getty Images)
VARIOUS CITIES, AUSTRALIA - FEBRUARY 18: Treasurer Josh Frydenberg during a press conference in the Blue Room at Parliament House on February 18, 2021 in Canberra, Australia. Facebook has banned publishers and users in Australia from posting and sharing news content as the Australian government prepares to pass laws that will require social media companies to pay news publishers for sharing or using content on their platforms.

On Thursday, the social media site announced Australian users and publishers would be banned from viewing or sharing domestic and international news on its site immediately. The move comes in response to the recent bill on Media Bargaining, which will require tech giants such as Facebook and Google to agree to feature their content with news providers.

In his controversial decision, which he believes would damage his image here in Australia, Frydenberg said Facebook was 'wrong,' Daily Mail reported.

Their decision to block Australians' entry to government pages - be it support through the pandemic, mental health, emergency care, the Bureau of Meteorology - was totally irrelevant to the media regulation that the Senate has yet to pass,' he added.

The Morrison government is committed to legislating and enforcing the code, Frydenberg said. Facebook has blocked significant government data pages, including the weather office, health services, and police agencies.

In the meantime, in the widespread censorship blitz, charities and community organizations have been attacked.

Facebook's ban includes weather, poetry, and the app itself

As the country's government moves closer to requiring big tech firms to pay to link media outlets' content, Facebook followed through with its threat to block the posting of news links from and to Australian users.

The news media negotiating bargaining code would see internet firms such as Google and Facebook forced to pay media organizations for material on their sites, as per Mashable. Although Google initially threatened to withdraw from Australia over the legislation with bipartisan support, it instead reached deals via its News Showcase with thousands of platforms to pay them for content.

But not only the state, national, and international news sources are affected by the ban. Government websites such as the Department of Meteorology, state departments, and health agencies are also involved; comedic news websites such as the Betoota Advocate' Onion-esque larrikin' local news as the Australian Council of Trade Unions; and even literary magazines.

Because of planned legislation in Australia to make tech giants pay for journalism, Facebook reported Thursday that it had blocked Australians from reading and posting news on the site. According to CBS News, Australian media will continue to publish news material on Facebook. Still, Australian users cannot access or share links and posts, the U.S.-based company said in a statement.

Facebook regional managing director William Easton said, "The proposed law completely misunderstands the relationship between our platform and publishers who use it to share news content."