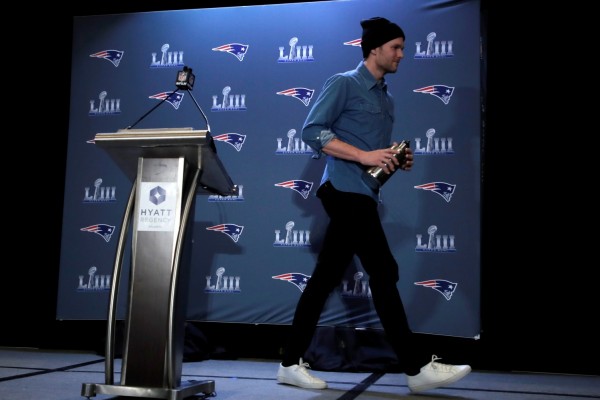 With Superbowl rings, Tom Brady bade farewell to his home and family for 20 years, the New England Patriots in a series of posts in Instagram on Tuesday.

Despite the separation from the Patriots, Brady showed his appreciation to the organization for what they have achieved and accomplished in Patriots uniform.

After 41 playoff starts since 2001, at age of 42, Brady is very vocal about his goal to play until he turned 45 but with the options created by the Patriots for Brady regarding his Free Agency both parties couldn't come to an agreement about his contract extension.

As part of the three pillars of the Patriots Success since 2001, Pats' owner Robert Kraft shared to ESPN's Mike Reiss that he loves Brady like a son and he and Brady had a positive and respectful discussion but he admitted that it is not the way he wants it to end but as a father to the Quarterback he wants what is Brady's best personal interest, saddened by the farewell Kraft told NBC Sports that he wants Brady to play only in Patriots uniform or to retire.

Bill Belichick, Brady's coach for 20 years, also showed his admiration to 199th pick in the 2000 NFL Draft and looked back on the relationship they have built with love, admiration, respect, and appreciation.

Brady's contributions to the Patriots' community.

In Brady's 20 years as a Patriot, he has made a lot of contributions to the team and also made history. He was awarded three Most Valuable Player awards in 2207, 2010 and 2017 which puts him second on the list of the leagues most MVPs of all-time along with Johnny Unitas, Jim Brown and Bretts Favre behind Peyton Manning. He has also been awarded four Super Bowl MVP awards.

Brady has set a record after appearing on 13 conference title-games, nine conference championships and is the holder of the all-time record in the highest number of division championships after winning 17 division titles. He also made history as he became the first 42-year-old quarterback to start every game during the NFL's regular season. Although saddened by Brady's farewell, Patriots' owner, Kraft expressed his gratitude and appreciation for Brady's contributions to the Patriots community.

In his post of the former 'Pats' Quarterback, he did not mention any team he will be part of for the 2020 season but reports say that Brady is poised to be in a "Buccaneers" uniform this upcoming season. However, this information has not been confirmed by both parties nor is there an official announcement yet.

Tampa is the expected landing spot for Tom Brady barring anything unforeseen, sources tell me and @JeffDarlington. There's no signing date or announcement officially set up, but Brady is expected to be a Buccaneer. — Adam Schefter (@AdamSchefter) March 17, 2020

Jason Licht, Buccaneers General Manager acknowledged to ESPN's Adam Schefter that they have their eyes on the Free Agent Brady and they spoke Monday but he mentioned that they are not pressuring Brady on his decision to sign with the Bucs'.

The Future of the Patriots

Finding a replacement for Brady will not be easy for the Patriots due to constraints brought about by their salary cap. Since Brady has reached free agency, he left the Patriots $13.5 million in dead money from his 2020 contract even if he will be playing for a different team.

After Brady's departure, the quarterback who is next line for the Patriots is Jarrett Stidham, a 23-year-old fourth-round draft pick in the 2019 NFL Draft who only appeared in three games last season. Aside from Stidham, the Cody Kessler, a five-year-veteran is also on the table.

With Brady's announcement, Ceasars Sportsbook has also reported a massive change in the odds of the Patriots winning the Super Bowl from 12-1 to 20-1.