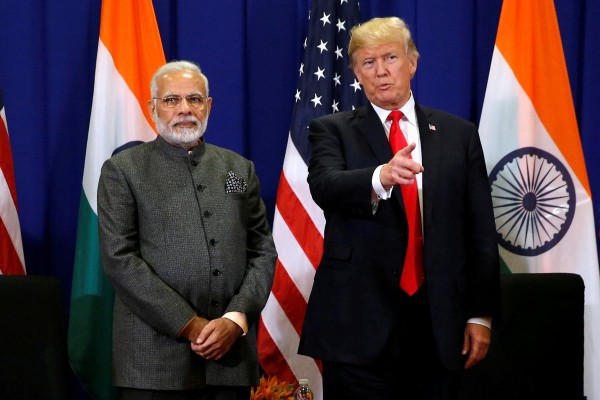 India is the world's seventh-biggest economy with a population of 1.3 billion people, which makes dairy farmers, distillers and drug makers from the United States want to penetrate their markets. However breaking into India's economy is not that easy.

There have been talks between New Delhi and the Trump government which intended to broker a trade deal between the countries. However, as Trump's visit to the country is impending so is the administration's struggle to forge the deal. This could mean that a pact between India and the US in terms of trade may still be months away.

As reported by Paul Wiseman, an economic writer for Time, Trump said that he is saving the big deal with India for later and that he is unsure whether it would be done before the US presidential election on November 3.

Wiseman also added that the failure to reach a deal amid an approaching summit only shows that there are similarities between President Donald Trump and Indian Prime minister Narendra Modi such as both men favor protecting their own producers other than opening their economies to foreigners.

According to US News, Richard Rossow, specialist at the Center for Strategic and International Studied for US-Indian relations, the two leaders are looking at trade as a zero-sum game. Hence, the difficulty in forging a deal.

For the past two decades, India has slowly reformed and opened its economy to trade around the world. However, under Modi's administration, the trend is slowly reverting back to their cumbersome bureaucracy and notoriously high-trade barriers.

When Modi was sworn into office in 2014, the regarded business reformer has become very protective of India's economy, matching Trump's "America First" with his own policy of putting "India First."

On Friday, a senior fellow at the Council on Foreign Relations, Edward Alden told reporters that America's trade behavior has pushed India into the exact opposite of the direction which the U.S. wants it to go.

During his early days into power, one of Trump's first acts was withdrawing from an Asia-Pacific free trade pact, which the Obama negotiated with 12-Asia Pacific countries. Similar to his, Modi also abandoned a trade agreement in the Pacific Rim worrying that India will be overwhelmed by imported goods from China.

Last year, tariffs on Indian imports rose after the U.S. administration increased the pressure on India by denying some of the country's products preferential duty-free access to the US market. This also resulted in a deficit in traded goods which reached $23.3 billion.

This year, the administration has been trying to broker a deal with India thinking the country may concede or make arrangements to regain the benefits of duty-free access, but Modi has not yielded just yet.

To this, Senior Policy Adviser from Akin Gump Strauss Hauer & Feld said that they have been hoping that India would respond with more urgency about the trade agreement that the U.S. government is trying to broker.

Related article: Is a Trade War Looming Between U.S. and India?