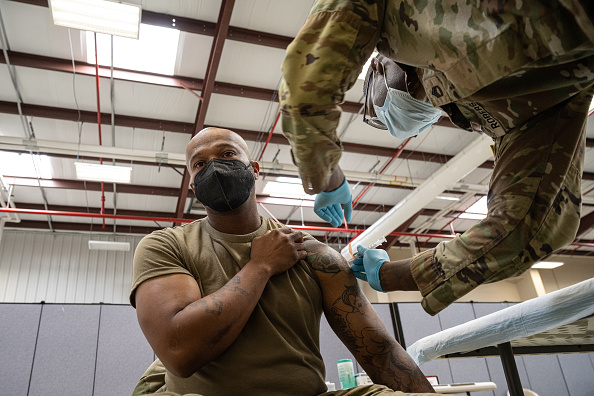 In a recently published article in MSN News, since August, when Defense Department officials, acting on an order from President Biden, notified the nation's 2.1 million soldiers that immunization would become obligatory, waivers would be uncommon, and those who refused would be penalized; the military's vaccination rate has risen. However, the soldiers' reaction has been disjointed.

Despite the fact that both services have a Nov. 28 deadline, the statistics indicate that 90 percent of active-duty Navy personnel are completely vaccinated, but just 72 percent of active-duty Marines are inoculated. More than 60,000 Air Force troops have only three weeks to fulfill the Pentagon's most ambitious goal.

Military authorities attribute the disparity in vaccination rates, in part, to the staggered deadlines set by each service for people to comply while expressing confidence that as those dates near, numbers will rapidly increase and the overwhelming majority of troops will follow instructions. Thousands of soldiers have already started their two-shot regimens, according to authorities, with 98 percent of active-duty sailors receiving at least one dosage in the Navy, according to a published article in The Washington Post.

Read Also: $500 Monthly Stimulus Checks May be Received by Some American Families for 3 Years If You Live in This City

According to the analysis of a news outlet, the Army Guard and Reserve account for almost 40 percent of the 62 service members killed by COVID-19. Only around 40 percent of people have received all of their vaccines. The active-duty Army is at 81 percent, with a deadline of Dec. 15.

Pentagon said that the increase in military infections, hospitalizations, and fatalities paralleled the devastating summer outbreak throughout the United States when the virus's delta form became the dominant strain and disproportionately affected younger, uninfected individuals. Deaths are expected to decrease in the following months, according to defense authorities.

The U.S. Pentagon statistics show that nearly a quarter-million service personnel have been infected with the virus since it started, with more than 2,000 being hospitalized, according to a recently published article in RP Newspaper.

National Guard and reserve troops serve in uniform on a part-time basis. However, when the pandemic, wildfires, and civil upheaval spread throughout the nation last year, the Defense Department and governors around the country enlisted more soldiers for service than at any point since World War II.

In a published article in Democratic Underground, officials have said that these service personnel are usually older than their active-duty colleagues and that their civilian employment or mobilizations may expose them to the virus more frequently than full-time soldiers who live and work in protected military facilities.

The Army justified the June deadline for its Guard and Reserve units in a statement, claiming that it reflected the size of those organizations in comparison to other services and military reserve components, as well as the geographic limitations imposed by their members' dispersion.

According to Lt. Col. Terence M. Kelley, an Army spokesman, pandemic-related restrictions on in-person assemblies, such as drilling weekends, have added to the administrative challenge of processing so many medical records, counseling soldiers who remain skeptical about the vaccine and injecting needles into people's arms.

Related Article: US Military Officials to Require Vaccination Among Staff by September 15