On Saturday, the Taliban said they would not collaborate with the US troops and government to combat extremism in Afghanistan. 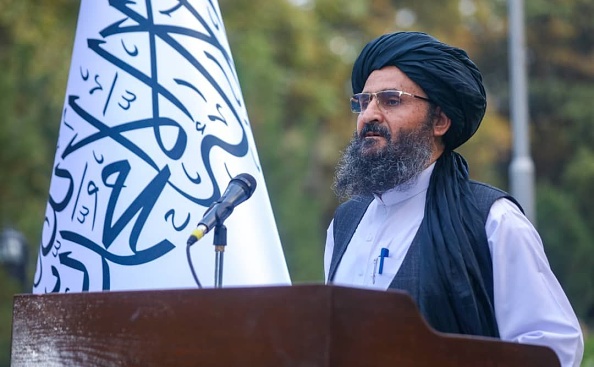 (Photo : Taliban Government/Handout/Anadolu Agency via Getty Images)
Taliban to deal their conflict with the ISIS-K independently without the help of the U.S. troops and government,

In a recently published article in Newsweek, the Taliban stated on Saturday that they would be able to deal with the Islamic State independently and would not cooperate with US authorities to stop the terrorist group from ramping up assaults in Afghanistan.

Suhail Shaheen, a political spokesperson for the Taliban, told a news source that the organization could fight Daesh on its own, using the Arabic name for the terrorist group.

The Taliban's announcement came a day after the Islamic State of Khorasan, or ISIS-K, claimed responsibility for a mosque assault in Afghanistan that left 46 Shiite Muslims dead and scores more injured. In Afghanistan, the organization has regularly attacked Shiite Muslims, according to a published article in Associated Press.

According to Sayed Ahmad Shah Hashemi, a Shiite community leader in Afghanistan, this tragic event has created anguish among Shiites and other sections of society. According to Hashemi, the bombing or the blast killed more than 70 individuals.

Following the suicide bombing in the Afghan city of Kunduz, Shiite religious authorities chastised the Taliban. They demanded that worshipers be better protected against the deadly attacks, according to a recently published article in US News.

According to a national news outlet, it was ISIS-K's second attack on the mosque in as many days and the organization's bloodiest since an attack on the Kabul airport in August. Around 170 civilians and 13 American soldiers were killed in the assault, which occurred as the US withdrew from the nation.

In a recently published article in CBS News, Afghanistan's new Taliban leaders instructed its commanders to perform a thorough background check on all militants in late September. Concerns that other extremist organizations had entered the Taliban's ranks motivated the unexpected action.

The head of ISIS-Khorasan (ISIS-K), a renowned terror operator whose name has remained a secret for years, is thought to be among the infiltrators, according to senior officials of the previous Afghan government and one high Taliban official presently in a security position. On the condition of anonymity, the officials told a news outlet.

Although some Taliban foot troops are said to have defected to ISIS-K or al Qaeda, choosing a more radical and violent interpretation of Islam, these sources claim that the ISIS branch is trying to undermine the Taliban's authority from inside and beyond the organization, which poses dangers not just to Afghanistan but also to the US and its allies.

ISIS-K has carried out some of Afghanistan's worst assaults since its formation in 2015. The organization did not immediately claim responsibility for the deadly explosion that struck a mosque in Kunduz on Friday, killing dozens of people. On the other hand, ISIS-K has a long history of targeting Afghanistan's Shiite Muslim minority, and Taliban spokesperson Bilal Karimi informed a news outlet that ISIS-K was responsible for the slaughter.

Related Article: Taliban Rule in Afghanistan Forces Fanatics To Join the ISIS-K Leading to Islamist Conflict Between the Militants