Quadrilateral Summit: China, Russia, Iran and Pakistan Meet To Help Afghans Out of the Crisis

China and Russia have enlisted Iran and Pakistan to help them deal with the Afghan issue during their quadrilateral summit. 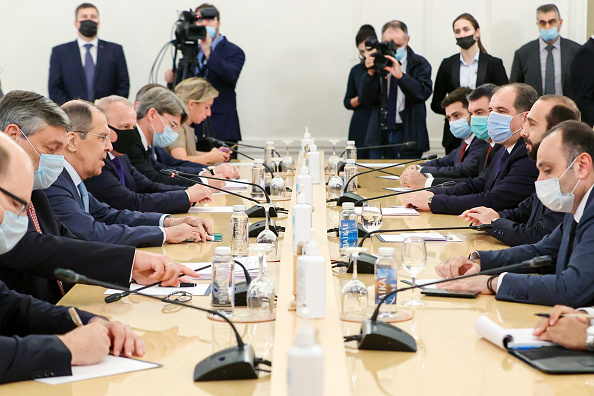 China and Russia are Enlarging Their Alliance

In a recently published article in Newsweek, China and Russia are expanding their alliance with Iran and Pakistan to establish a regional strategy for addressing the still-simmering situation in Afghanistan, where the Taliban seeks international recognition for its authority.

China, Russia, Iran, and Pakistan officials gathered Thursday for their first quadrilateral meeting on the eve of the Shanghai Cooperation Organization heads of state conference, which will be held Friday in the Tajik city of Dushanbe.

The meeting is the most recent forum for regional nations to discuss the situation in Afghanistan, where the international community is worried about the Taliban's capacity to pacify the war-torn country and control the expansion of terrorist organizations operating there, according to a report in Washington Newsday.

Read Also: Taliban, Chinese Officials Meet Ahead of US Withdrawal From Afghanistan

Russian Foreign Minister Sergey Lavrov remarked in his opening comments that the nations directly bordering Afghanistan are the ones that can make a difference in the area by assisting the Afghan people in overcoming the catastrophe caused by the United States and NATO's 20-year-long conflict.

He also added, "Acting in good faith. We can make a difference in creating necessary external conditions for Afghans to take control of their own destiny, without any threats emanating from Afghan territory in terms of terrorism, drug trafficking, or any risks and challenges created from Afghan territory to its neighbors," according to a published report in Digi Chat.

In a statement released following their meeting, the Russian Foreign Ministry stated that perspectives on problems of supporting the development of peace, stability, and security in Afghanistan were discussed, and the necessity of creating national reconciliation in the country was emphasized.

According to the Iranian side's account of the four-way talks, senior diplomats pushed for establishing an inclusive government in Afghanistan with participation from all ethnic groups. It was also discussed if Afghanistan could be rid of terrorism, drugs, and threats to its neighbors.

A meeting of members of the Collective Security Treaty Organization (CSTO), a post-Soviet, Russia-led alliance that includes Armenia and Belarus as well as Central Asian nations, began on Thursday focused on the security situation in Afghanistan and its border. The following is a compressed version of the data.

Russian President Vladimir Putin said that the situation in the CSTO's zone of responsibility and its member states' external borders continues insecure, posing new and serious challenges and threats to the nation's security.

Furthermore, on Friday, Putin was set to make another appearance at the Shanghai Cooperation Organization (SCO) leaders' meeting in Dushanbe. China, India, Pakistan, and Uzbekistan are all members of the SCO, as are Kazakhstan, Kyrgyzstan, and Tajikistan.

The SCO, founded two decades ago, just months before the US-led war in Afghanistan, has a history of internal strife. Tensions between strategic allies China and Pakistan and India and political divisions that have long prevented Iran's entrance were among the issues that surfaced.