Despite Pyongyang's declaration that it had launched a new long-range cruise missile over the weekend, a White House spokesperson said on Monday that the U.S. is still willing to talk with the country. 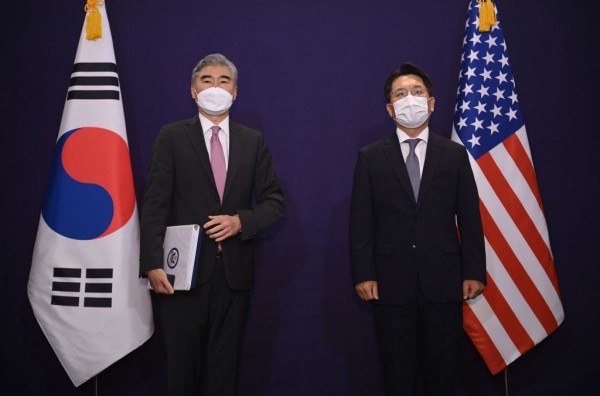 In a recently published article in MSN News, North Korea's official media reported successful testing of a new long-range cruise missile on Monday, experts speculating that it may be the country's first nuclear-capable weapon and more powerful compared to its previous missiles.

During the tests on Saturday and Sunday, North Korea's official Korean Central News Agency claimed the missiles were "a strategic weapon of enormous importance" that traveled 1,500 kilometers (930 miles) before striking their objectives and landing into the country's territorial seas.

Meanwhile, it is unknown if North Korea has mastered the technology required to manufacture warheads tiny enough to fit on a cruise missile; but the country's leader, Kim Jong Un, said earlier this year that creating smaller bombs is a high priority, according to a report published in Channel News Asia.

U.N. spokesperson Stephane Dujarric told reporters at the United Nations in New York that he has seen the reports and that he believes they are just another reminder that diplomatic engagement is the only way to achieve lasting peace and full and verifiable denuclearization on the Korean Peninsula.

On the other hand, North Korea's continued emphasis on expanding its weapons program and the dangers it presents to its neighbors and the world community, according to the US military's Indo-Pacific Command (INDOPACOM).

Because cruise missiles are not expressly prohibited by United Nations Security Council resolutions, they attract less attention than ballistic missiles. Analysts speculated that the term "strategic" might imply a nuclear-capable system, according to a report published in Kyodo News.

The United States, South Korea, and Japan's top nuclear negotiators will meet in Tokyo this week to discuss how to restart attempts to convince North Korea to give up its nuclear arsenal. These countries have long been negotiating about denuclearization.

U.S. President Joe Biden has said that the dialogue is a viable option, but it has demonstrated no inclination to relax sanctions against North Korea. In August, U.S. ambassador for North Korea Sung Kim stated he was willing to meet with North Korean officials "anywhere, at any time."

Since 2018, when he began a dialogue with former President Donald Trump while trying to leverage his arsenal for sanctions relief, Kim has unilaterally stopped North Korean testing of nuclear weapons and long-range ballistic missiles aimed at the American heartland.

While Kim has maintained a moratorium on nuclear and long-range missile tests since his negotiations with Trump broke down in 2019, the North has subsequently tested a growing arsenal of short-range solid-fuel missiles launched from land-based launchers, per Associated Press.

According to experts, these weapons pose a danger to South Korea and Japan since they can be fired rapidly from vehicles and can travel at flattened trajectories, making them difficult to detect and intercept by defensive systems.