Conor McGregor and Dustin Poirier's main event battle at UFC 264 ended in a startling manner, with McGregor sustaining a bizarre fractured leg after rolling over his ankle in the closing seconds of the first round. 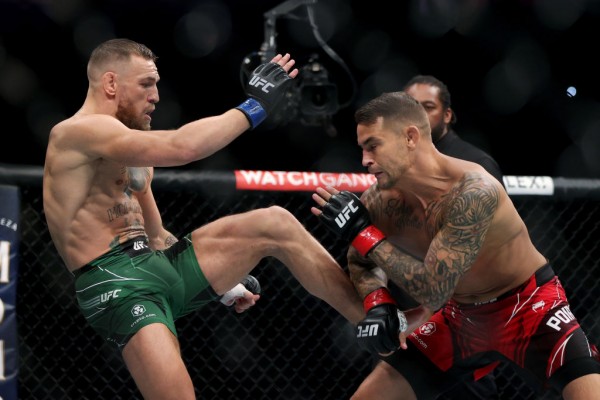 (Photo : Stacy Revere/Getty Images)
Conor McGregor of Ireland (L) attempts a kick against Dustin Poirier in the first round in their lightweight bout during UFC 264: Poirier v McGregor 3 at T-Mobile Arena.

Dustin Poirier, an American brawler, defeated Conor McGregor by TKO in their lightweight UFC trilogy battle on Saturday in Las Vegas, when the Irishman looked to break his left leg in the last seconds of the first round, according to a published report in The Jakarta Post.

After a bleeding McGregor swung and missed a punch, he then fell backward; his lower knee grotesquely collapsed beneath him near the octagon's edge. Afterward, the fight was officially declared a "doctor's stoppage" at the end of the first round.

In a published article in the New York Post, Poirier then pounced on a defenseless McGregor, pouring down a barrage of punches and elbows until the bell rang, saving McGregor in front of the T-Mobile arena's sold-out crowd. McGregor's injury could be found in his lower tibia, according to promoters; and he was scheduled to have surgery on Sunday to fix the damage.

In a recently published article in CNET, McGregor underwent surgery on Sunday, to treat his leg injury, according to Dana White. McGregor's long-time manager, Audie Attar, reportedly said that McGregor had a successful three-hour surgery to fix tibia and fibula fractures.

Attar said in a statement that both doctors are optimistic that he will make a complete recovery and that he will return to the Octagon soon. McGregor sent out a video message on social media after the surgery.

Dana White, the president of the UFC, told reporters that they don't know how long he'll be out of the ring or how much rehab and treatment he'll need. He does think, though, that the fourth bout between McGregor and Poirier will take place in the future, once McGregor finally recovers from his surgery.

McGregor Got Injured in Round 1

McGregor came out with a lot of leg kicks. The battle was waged at a breakneck speed. After attempting a guillotine choke, Poirier managed to clip McGregor and took him to the ground. The battle returned to the feet after a torrent of ground and pound. Then, McGregor twisted his ankle following an exchange.

Regardless of the outcome, McGregor was losing this battle. In the end, the battle was stopped due to doctor's halt. Following that, as McGregor was having his leg treated, Joe Rogan interviewed with him. He said that the situation was "not over."

While Poirier was proclaimed the victor and awarded the technical knockout through doctor stoppage, the "Notorious" remained on the ground until he was carried out on a stretcher. McGregor has lost to Poirier twice in the previous six months.

McGregor's left ankle was twisted at a severe angle and he was unable to continue the bout after just the first round. When McGregor broke his leg early in the first round, Poirier claimed he believed he felt it.