Rescue operations for a missing Indonesia submarine that is thought to have sunk in the deep waters north of Bali continue as oxygen is running out for the 53 crew onboard. Indonesian rescue teams have pinpointed a possible location for the submarine. Around 25 miles north of Bali, a navy ship discovered an object 164 to 328 feet below the surface with an oil slick. 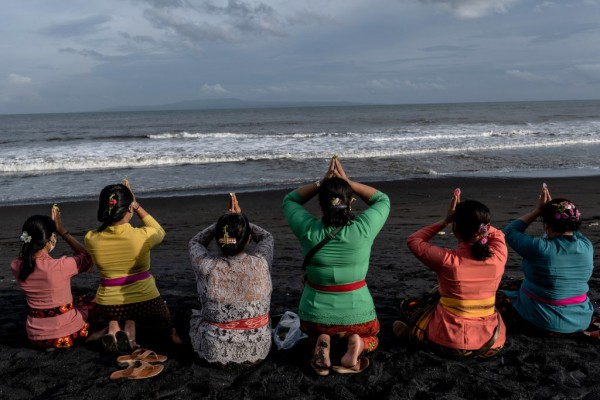 (Photo : Agung Parameswara/Getty Images)
Plastic Beach: Bali's Growing Trash Problem BALI, INDONESIA - JANUARY 31 : Balinese women pray as they face to the beach and celebrate Banyu Pinaruh on January 31, 2021 in Masceti Beach, Bali, Indonesia. Banyu Pinaruh is a ritual for self-cleansing performed by Balinese Hindus after celebrate Saraswati Day, a day to worship a Goddess of Knowledge. The beach is important for Balinese for social and spiritual life. In the philosophy of Balinese people respecting the sea is called Samudra Kertih. In Bali, famed among tourists for its beaches and sunsets, the northwest monsoon brings a different kind of arrival - vast amounts of plastic waste. From December to March, so much trash washes up on the beaches that the local government struggles to keep up and clean up. Locals and workers have together been collecting 80 tonnes of waste a day as it washes ashore at world-famous beaches from Seminyak to Kuta, the local government said. Almost 75 percent of it is plastic, according to a study by the Center of Remote Sensing and Ocean Sciences at Bali's Udayana University. In the absence of tourism due to Covid-19, the trash problem has become obvious on beaches almost entirely devoid of visitors. Indonesia is part of the U.N.'s Clean Seas campaign, which aims to halt the tide of plastic trash polluting the oceans. As part of its commitment, the government has vowed to reduce marine plastic waste by 70 percent by 2025. (not the actual story/incident)

Indonesia's navy is continuing its mission while an Australian warship armed with sonar arrived on Friday to assist, as per the Associated Press. The U.S. is sending "airborne assets" to help, Reuters reported. The KRI Nanggala-402 submarine was believed to be at a depth of 2,000 to 2,300 feet, dangerously close to being crushed.

When Daewoo Shipbuilding and Marine Engineering refitted the submarine's internal structures and systems in 2009-2012, the collapse depth was 200 meters or 656 feet, according to Ahn Guk-Hyeon of the shipbuilding firm.

During a naval drill on Wednesday morning, the submarine disappeared. According to the Indonesian navy, an oil leak near the submarine's last location may signify fuel tank damage or a warning from the crew.

When contact was lost, the German-built submarine was performing a torpedo exercise. It is thought to be along the Bali Strait, which connects Bali and Java. According to Frank Owen, secretary of the Submarine Institute of Australia, the submarine could be too far for a search team to reach.

The Indonesian vessel was not equipped with a rescue seat around an escape hatch intended for underwater rescues, said Owen, a former submariner who built an Australian submarine rescue system. He explained that a rescue submarine would make a waterproof connection to a disabled submarine by fitting a "skirt" over the rescue seat, which would allow the hatch to be opened without the disabled submarine filling with water.

CNN confirmed that 21 warships, three submarines, and five planes are looking for the submarine. According to the United States Naval Institute, Malaysia, Singapore, and India have dispatched submarine rescue ships.

The U.S. Navy, Australia's navy, France's navy, and Germany's navy have all volunteered to help. The Indonesia navy operates five submarines, including the KRI Nanggala-402. Howaldtswerke-Deutsche Werft, a German company, founded the submarine in 1977. Indonesia purchased it in 1981.

Officials said Indonesian President Joko Widodo canceled a visit to Banyuwangi port, where several rescue ships had left earlier, to prepare for a regional summit this weekend in Jakarta. He requested Indonesians to pray for the crew's safe return, and he ordered a full-scale search for the submarine.

Oil may have leaked from a break in the submarine's fuel tank, or the crew could have released fuel and fluids to lower the vessel's weight so it could surface, said the Navy Chief of Staff Adm. Yudo Margono.

According to Margono, an unexplained object with strong magnetism was discovered at a depth of 50 to 100 meters (165 to 330 feet), and officials hoped it was the submarine. However, the navy claims the submarine sank to a depth of 2,000-2,300 feet, much lower than its collapse depth, where water pressure would be too high for the hull to bear.

A South Korean firm that refitted the vessel in 2009-2012 measured the failure depth to be 655 ft. The reason for the disappearance remains unknown. According to the navy, an electrical malfunction could have prevented the submarine from performing emergency resurfacing procedures, CBS News reported.