The 10 members of the ASEAN meets on Saturday to address Myanmar crisis. The regional body will be scrutinized as much as the general who led the February coup that deposed Aung San Suu Kyi's elected government.

Opponents of the junta are enraged that ASEAN is inviting the junta's leader, Senior Gen. Min Aung Hlaing, to its meeting in the Indonesian capital Jakarta, claiming that he is not Myanmar's rightful leader since he took power by force. The deadly brutality committed by the armed forces he oversees, who are responsible for the deaths of hundreds of mostly unarmed protestors and civilians, also weighs heavily against him. 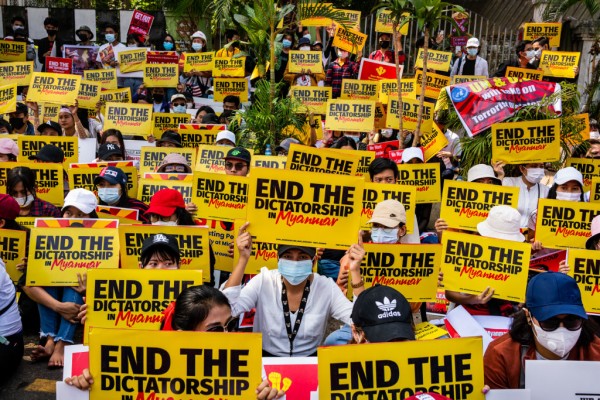 (Photo : Hkun Lat/Getty Images)
Protests Continue Despite Military Vehicles Presence YANGON, MYANMAR - FEBRUARY 16: Protesters hold banners as they gather outside the U.S. Embassy for a protest against the military coup on February 16, 2021 in Yangon, Myanmar. The military junta, which staged a coup against the elected National League for Democracy (NLD) government, made a second charge against Myanmar's de-facto leader Aung San Suu Kyi. She remains in house arrest as the military moved to shut down internet and communications overnight in a bid to stem widespread protests across the country.

Opponents of the junta also supported the proposal that Myanmar should be represented at the Jakarta meeting by the opposition's parallel National Unity Government, which was newly formed by elected legislators who were banned from taking office by the army. However, it has not received an invitation.

There is a very practical explanation for engaging Min Aung Hlaing face to face, according to Evan Laksmana, a researcher for Indonesia's Center for Strategic and International Studies, a think tank with strong government ties. ASEAN admits that the irony is that one side is perpetrating the violence, and that is why the military has been called to the event. "As a result, the military dictatorship does not have any legitimacy," he said.

By speaking with the general, ASEAN hopes to start a longer-term structure process, beginning with ending the violence, ABC reported. That will hopefully help promote dialogue among all stakeholders in Myanmar, not just with the military regime.

According to the United Nations, food insecurity and hunger are on the rise in Myanmar as a result of the military coup and worsening financial crisis, with millions of more people likely to go hungry in the coming months. The World Food Program (WFP) report indicated up to 3.4 million more people will struggle to afford food in the next three to six months, with urban areas being the hardest hit as employment losses in production, construction, and utilities increase and food costs spike.

Myanmar's army defeated the democratically elected civilian government on February 1, plunging the Southeast Asian country into chaos and brutally suppressing mass protests and a national civil disobedience campaign, according to a monitoring agency. The financial sector has come to a halt as a result of the recession, with several banks closing and companies struggling to make payments, and consumers unable to withdraw cash, as per Astro Awani.

Many people depend on remittances from families abroad. The majority of imports and exports have ceased, and factories have shut down, SCMP reported. Myanmar's GDP is expected to contract 10 percent in 2021, reversing historically optimistic developments, according to the World Bank.

Prior to the coup, the World Food Program estimated that 2.8 million people in Myanmar were food insecure. The coronavirus pandemic wreaked havoc on the economy, which had been recovering from decades of isolation and financial mismanagement under former military administrations.