Kim Jong-Un has instructed his nuclear missiles to be "combat ready" so that they can be launched at any moment, reports claimed. Officials in charge of North Korea's rockets have been instructed to carry out orders "at any time," said a high-ranking source.

The rogue state celebrated its founder Kim Sung Il's birthday, dubbed the Sun Festival, yesterday. According to N.K. News, special notices are given to the military and firearms operators every year during the annual event. 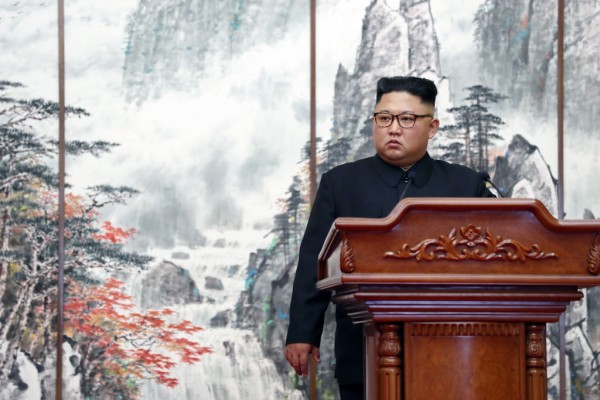 (Photo : Pyeongyang Press Corps/Pool/Getty Images)
North And South Korean Leaders Meet For Third Summit In Pyongyang PYONGYANG, NORTH KOREA - SEPTEMBER 19: (EDITORIAL USE ONLY, NO COMMERCIAL USE) North Korean leader Kim Jong Un attends the joint press conference with South Korean President Moon Jae-in (not in pucture) at Paekhwawon State Guesthouse on September 19, 2018 in Pyongyang, North Korea. Kim and Moon meet for the Inter-Korean summit talks after the 1945 division of the peninsula, and will discuss ways to denuclearize the Korean Peninsula.

Since Monday, military authorities have announced special Guard Week, and all troops have been given a particular alert order to be ready. After the Sun Festival, one source told the news outlet that the order to ready missile fire is unusual. Reports say a launch of a short-range ballistic missile (SLBM) is on the way. On Wednesday, media outlet 38 North released a satellite picture of the SLBM test barge in the Sinpo Shipyard's defense tank.

Meanwhile, dictator Kim Jong-Un could be constructing a lethal arsenal of 240 nuclear warheads and ballistic missiles capable of wiping out the West, reports claimed.

Allies must create plans to fight any nuclear weapons attempts by North Korea that "could result in millions of deaths," according to a report by the Asian Institute for Policy Studies and the Rand Corporation. It claimed that dictator Kim Jong-Un is "appearing to be developing a nuclear missile force capable of allowing peninsula supremacy." And that "enhanced" South Korean and U.S. defenses should be placed in order "to sustain deterrence."

During a weapons drill in March, North Korea launched a series of short-range ballistic missiles into the Sea of Japan, the first such test since Joe Biden won the U.S. presidential election. Since Biden's inauguration on January 20, the White House said that North Korea has avoided engaging in talks with Washington.

Following the U.S. president's criticism of the missile tests, the hermit kingdom threatened the U.S. with "invincible force." One of the country's senior officials called the U.S. President a "gangster" who made the "first wrong" decision.

Fears of a conflict with North Korea have grown since the heightened activity was observed in the country's leading testing site earlier this month, The Sun reported. Experts say the secretive state is now ramping up its nuclear program, based on satellite imagery showing Kim's ongoing development program.

President Biden met with Japanese Prime Minister Yoshihide Suga in person for the first time since taking office. In the face of growing threats from China and North Korea, the two leaders outlined their strategic vision for the Indo-Pacific, as per The Hill via MSN.

Both leaders referred to the need to confront threats in the East and South China Seas, a nod to Beijing's growing aggressiveness. International watchdogs are concerned that China may take military action against Taiwan, so Biden avoided mentioning the island by name.

China has also been criticized for its human rights record, including its role in Myanmar's military coup and treatment of Uighur Muslims. Suga stressed the part of the U.S.-Japan-South Korea trilateral relationship in handling North Korea, which has launched new missiles in recent weeks and has not responded to the Biden administration's outreach.

Biden has mentioned the "Quad," which consists of the leaders of the United States, Japan, Australia, and India to discuss vaccine delivery and other regional concerns. The two leaders also spoke about the Summer Olympics, to be held in Tokyo later this year. Biden noted the games' relevance to Japan, but neither leader expressed an opinion about whether the Olympics should carry on despite the pandemic.