North Korean leader Kim Jong-Un admitted that his country is in its "worst-ever situation" at a massive political conference in Pyongyang. He addressed thousands of grassroots members of his ruling party. 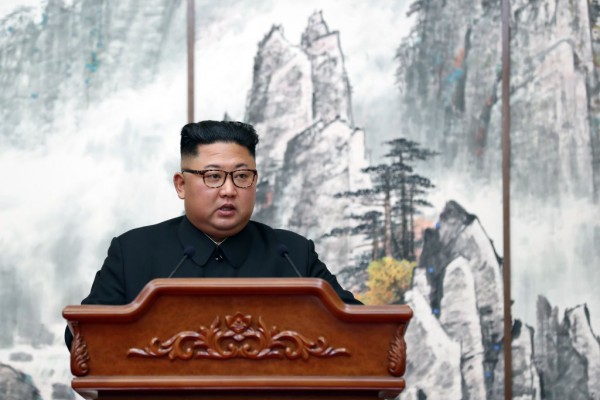 (Photo : Pyeongyang Press Corps/Pool/Getty Images)
North And South Korean Leaders Meet For Third Summit In Pyongyang PYONGYANG, NORTH KOREA - SEPTEMBER 19: (EDITORIAL USE ONLY, NO COMMERCIAL USE) North Korean leader Kim Jong Un attends the joint press conference with South Korean President Moon Jae-in (not in pucture) at Paekhwawon State Guesthouse on September 19, 2018 in Pyongyang, North Korea. Kim and Moon meet for the Inter-Korean summit talks after the 1945 division of the peninsula, and will discuss ways to denuclearize the Korean Peninsula.

As he completes a decade in power, experts believe Kim Jong-Un is facing his hardest challenge yet. North Korea's coronavirus lockdown causes more shock to an economy already battered by decades of mismanagement and punishing US-led sanctions over Kim Jong-Un's nuclear weapons program.

Kim made the remarks during an opening speech at a meeting of the Workers' Party's cell secretaries on Tuesday, North's official Korean Central News Agency said. He encouraged members to follow through on decisions taken at a party congress in January. At the time, he pledged to strengthen his missile defense in the face of US opposition and unveiled a new five-year national development strategy.

The congress came months after Kim expressed unusual candor by admitting that his efforts to boost the economy were failing at another political gathering, CBS News reported. During his speech on Tuesday, Kim Jong-Un also mocked the party's grassroots units for "shortcomings" that he said needed to be addressed right away to ensure the party's "stable and sustainable" growth.

Party cells, which are made up of five to thirty members and manage activities and reside in factories and other locations, are the smallest party authority units. The Workers' Party relies heavily on the network to maintain its influence. The previous cell secretaries' meeting was held in 2017.

The economic losses have left Kim Jong-Un with little to show for his ambitious diplomacy with former President Trump, which ended in a stalemate on sanctions relief in exchange for the North's denuclearization efforts.

Pyongyang has so far refused the Biden administration's overture for negotiations, claiming that Washington must first abandon its "hostile" policies, and has ramped up the pressure by resuming ballistic missile tests after a yearlong halt last month.

North Korea stole $1B over past the decade, study reveals

According to a recent report, North Korea is linked to more than half of the world's top ten financial-hacking cases and may have stolen more than $1 billion since 2011. In a recent study, Britain-based Traders of Crypto said that North Korea has been stealing bitcoin exchanges and engaged in other types of cyber fraud consistently, as per UPI.

Five of the top ten financial heists from 2011 to 2020 were linked to North Korea, said the report. North Korea's cybercriminals carried out the attack on the Japanese exchange Coincheck in January 2018. They stole $534 million in NEM, an open-source cryptocurrency token.

The New Economic Movement is abbreviated as NEM. The heist is one of the most important in the history of virtual currencies.

North Korea is also claimed to be the source of "almost all" cryptocurrency thefts, said the analyst. Cryptocurrency moves from "cold" to "hot" wallets during virtual currency transactions, equivalent to transferring cash from bank vaults to ATMs. According to Fortune, hackers "pounce" during those transactions.