Police Clash with Protesters in Brooklyn Center Over Officer-Involved Shooting 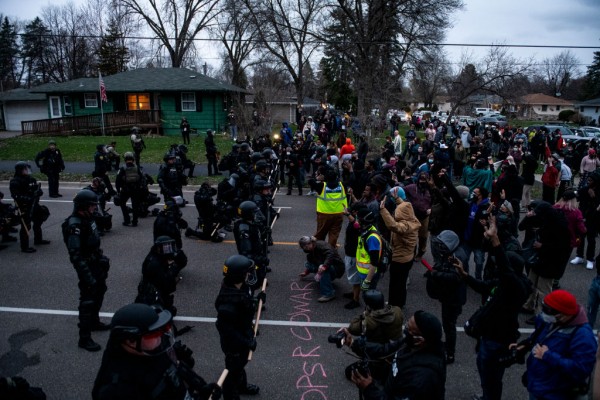 Following tensions after a shooting involving law enforcement, the Brooklyn Center city has imposed a curfew that will last until 6 AM Monday. As the Minnesota Bureau of Criminal Apprehension investigated the deadly shooting during a traffic arrest, a large crowd gathered near the scene.

Daunte Wright, 20, has been named by family members as the victim. People assembled outside the Brooklyn Center Police Headquarters after police left the shooting scene Sunday evening, and the situation turned violent, as per KARE11.

According to crews on the scene, multiple rounds of tear gas were launched by law enforcement in an attempt to clear the crowd. Early Monday morning, Operation Safety Net, a group formed to help with any possible unrest during the Derek Chauvin trial, held a press conference. Commissioner John Harrington of the Minnesota Department of Public Safety discussed the social disturbance that resulted from the shooting at Brooklyn Center during the briefing.

"Within hours of that, we heard, a secondary party was at the Shingle Creek Mall, and we have evidence of around 20 businesses being broken into during that time," Harrington said. "The crowd at the Brooklyn Center Police Department has largely dispersed at this moment."

Colonel Matt Langer of the Minnesota State Patrol said Monday; there would be more law enforcement in the area, including the National Guard, to help with any civil strife.

After people protested a man's death in an officer-involved shooting and car crash on Sunday, the Minnesota National Guard was dispatched to Brooklyn Center, CNN via MSN reported. According to Minnesota Governor Tim Walz, hundreds of residents marched to the town's police station Sunday night after a man named Daunte Wright was killed in a traffic accident and ensuing car accident.

During a traffic stop, police discovered a man had outstanding warrants and attempted to take him into custody, the police explained. He returned to his car and was shot by an officer. Then, he drove several blocks before colliding with another vehicle.

In a tweet, Walz said, "Gwen and I are praying for Daunte Wright's family as our state mourns another Black man taken by law enforcement." Katie Wright, Wright's mother, told CNN affiliate WCCO that her 20-year-old son called her while being pulled over.

Aerial video from CNN affiliate KARE on Sunday shows several police vehicles surrounded by crowds around the Brooklyn Center crash site after the accident. People were seen trying to destroy police cars in the affiliate footage.

Floyd was killed in Minneapolis less than 11 months ago after Chauvin kneeled on his neck. Protests spread throughout the United States after footage of his death went viral last May.

In a statement posted on the school's website, Superintendent Dr. Carly Baker stated that schools would be closed Monday and that distance learning will be used out of an abundance of caution after the officer-involved shooting.