One person died, and five others were injured in a shooting at a cabinet plant in Bryan, Texas, on Thursday, police said. The shooting prompted a search and the subsequent arrest of a male gunman who also shot a state trooper.

According to Bryan Police Chief Eric Buske, the shooting suspect is an employee at the Kent Moore Cabinets plant, where the shooting occurred about 2:30 P.M. inside plant bays where workers produce cabinets.

One died, five others injured amid Texas shooting 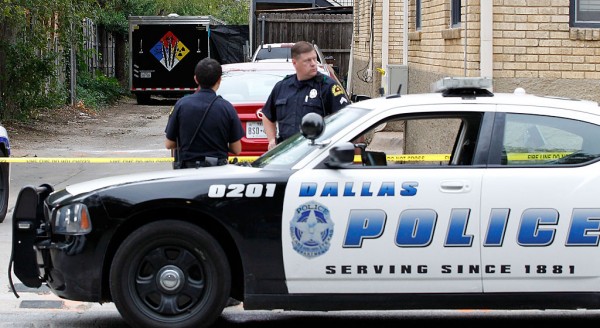 (Photo : Mike Stone/Getty Images)
Health Care Worker In Dallas Tests Positive For Ebola Virus DALLAS, TX - OCTOBER 12: Dallas police setup a barrier after a hazmat vehicle entered the alley behind the apartment where a second person diagnosed with the Ebola virus resides on October 12, 2014 in Dallas, Texas. A female nurse working at Texas Heath Presbyterian Hospital, the same facility that treated Thomas Eric Duncan, has tested positive for the virus.

Officials said the five shooting victims were taken to nearby hospitals. But one of the five was not actually hit but was taken to the hospital due to an asthma attack, as per CBS News.

According to Buske, the shooter acted alone and used a handgun, but the reason for the shooting was not immediately known. He said that by the time police arrived, the suspect, who has not been identified, had vanished.

Sheriff Don Sowell of Grimes County said the perpetrator was arrested in the small town of Iola, about 30 miles from the cabinet facility. According to the Texas Department of Public Safety, a state trooper who was shot while chasing the perpetrator is in serious but stable condition.

Kent Moore Cabinets staff were interviewed, and witnesses identified a suspect, Bryan Police Lt. Jason James said before the suspect was caught. "When law enforcement arrived at the incident place, it was already over," said James.

The Bureau of Alcohol, Tobacco, Firearms, and Explosives sent dogs and agents to the shooting scene, as per spokesman Deon Washington. During the investigation, police have asked that people stay away from the business, AP News reported.

Where does the shooting in Texas happen

Bryan is located about 100 miles northwest of Houston and is home to Texas A&M University. With over 86,000 residents, the city serves as a market, medical, and industrial hub for the middle Brazos River valley. An industry focused on the nearby College Station University and its associated agribusiness; computers, research, and development. It is also the county seat of Brazos.

Kent Moore Cabinets is based in Bryan and hires more than 600 employees throughout the state, said the company's website. Custom cabinets are made by the firm, which has design centers in College Station and nearly a dozen other Texas cities.

The person who answered a call at Kent Moore Cabinets' office on Thursday said she couldn't give any information regarding the shooting. Governor Greg Abbott of Texas offered a prayer for the victims of the shooting and their families.

He said he is working closely with the Texas Rangers and the Texas Department of Public Safety to help local law enforcement respond quickly to the incident. The shooting suspect was detained as a result of their efforts."