In 2020, former President Trump's reelection campaign is said to have given a total of $122 million in refunds to supporters. 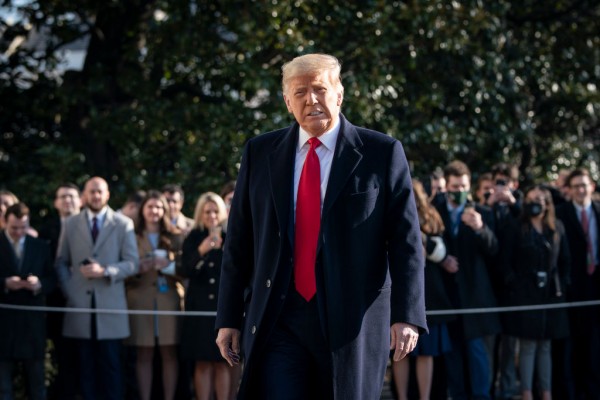 (Photo : Drew Angerer/Getty Images)
President Trump Departs White House For Border Visit WASHINGTON, DC - JANUARY 12: U.S. President Donald Trump turns to reporters as he exits the White House to walk toward Marine One on the South Lawn on January 12, 2021 in Washington, DC. Following last week's deadly pro-Trump riot at the U.S. Capitol, President Trump is making his first public appearance with a trip to the town of Alamo, Texas to view the construction of the wall along the U.S.-Mexico border.

Officials used a fine-print disclaimer in communications to continue billing one-time contributors or multiplying their donation amounts, prompting the refunds. The Trump campaign reportedly set up weekly periodic contributions as the default for online contributors beginning in September, with just two months before the 2020 presidential election, according to a New York Times report released Saturday.

Donors had to manually uncheck a box to opt-out, and the note of recurring donations was only included in a fine-print statement, as per the Times. As Election Day approached, the Trump campaign added a second pre-checked box that doubles a person's contribution, as well as new lines of text in bold and capital letters, which the paper said diverted contributors from language advising them about how to opt-out of the automated donation plan.

Several Trump backers, including retirees and service veterans, submitted fraud reports to banks and credit card firms after witnessing fraudulent transactions from their accounts shortly after the campaign introduced these practices, according to the news site. Stacy Blatt, a 63-year-old hospice patient who contributed $500 to Trump's campaign in September, was one of them. The Trump campaign, on the other hand, reportedly withdrew $3,000 from Blatt in less than a month. In February, Blatt died due to cancer.

After the election, Trump sought to collect funds in what he said was an effort to combat widespread voting fraud in many states. Following the 2020 election, he argued twice that the election has been tainted by massive voter fraud.

Federal and state election authorities, on the other hand, have confirmed that there is no proof of widespread voting fraud. The Trump campaign reportedly used tens of millions of dollars from his "Stop the Steal" attempts to help offset the returns promised to contributors, according to the Times.

The public reports checked by the Times indicate that the Biden campaign just refunded 2.2% of its estimated 2020 donations, as per The Hill. Meanwhile, only 0.87% of WinRed transactions were involved in structured credit card conflicts, Trump spokesman Jason Miller pushed back.

Former President Donald Trump rejected New York Times' report alleging he used questionable fundraising strategies during the 2020 campaign, calling it a "one-sided attack piece" published by the newspaper. "In yet another intensely partisan tale, the collapsing New York Times published a completely false, one-sided hit piece this weekend that attempted to disparage our record-setting grassroots fundraising effort during the 2020 campaign," Trump said in a statement released Monday by his Save America political action committee (PAC).

Trump said in a statement released Monday that his 2020 campaign would use Democratic fundraising strategies, including the ActBlue website. "We took what leftist ActBlue taught us, and now we're smarter than they are!" In reality, many people were so excited that they donated again and again, and we would immediately refund their donations if they gave too much. Our average conflict rate was less than 1% of all online contributions, which is very low," said the former commander-in-chief.

This is done by Democrats as well. The New York Times was aware of this, but omitted it from their story, he added. Trump said that the 2020 campaign's efforts, in collaboration with the GOP, were "all done lawfully," The Epoch Times reported.