Despite a significant increase in immigrants at the US-Mexico border in 2019, Eric Trump, the son of former President Donald Trump, said that illegal immigration was "fixed" under his father's presidency. 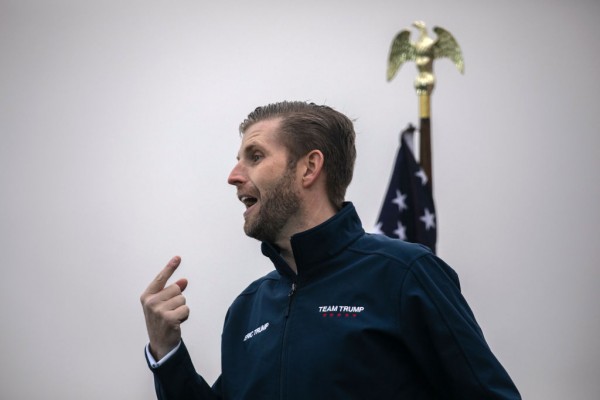 Former President Donald Trump and his Republican allies have slammed President Joe Biden's immigration policies, alleging that they have resulted in an influx of primarily Latin American migrants seeking to enter the United States.

Meanwhile, Democrats and Biden have responded by pointing out that the United States regularly experiences spikes of Central American migrants, even under Trump. According to the President and his backers, high levels of poverty, environmental factors, and high crime rates in Central America are also behind the migration surge. During a Sunday interview with Fox News, Eric Trump, an executive vice president of the Trump Organization, blamed Biden's policy reforms, falsely saying that something had been resolved during his father's administration.

Eric Trump said, "My father had the issue fixed." He claimed that Joe Biden had "immediately suspended" the building of the southern border wall, which had been a central campaign pledge made by his father. However, immigration experts have long claimed that the wall does nothing to discourage immigrants, who merely use ladders or other ways to climb the barrier in remote locations, as per Newsweek.

According to Customs and Border Protection (CBP) reports, undocumented migration to the United States has been on the decline for the past two decades. Under former President Barack Obama, the development stood, though there was a significant increase in 2014. Despite Trump's hardline border measures, such as the internationally denounced family separation policy and the drive to construct the border wall, the number of illegal migrants arrested entering the border increased to 860,000 in 2019, much more than the 2009 estimate of less than 560,000.

Although the latest rise of migration is part of a historical pattern, Vice President Kamala Harris has called the situation a "huge issue," and President Joe Biden has said something needs to be done to fix it. To counter violence and economic insecurity in Central America, the administration is calling for more funding.

Meanwhile, Secretary of Homeland Security Alejandro Mayorkas has predicted the largest migrant surge in two decades in the United States. "On the southwest border, we are on track to meet more immigrants than we have in the past 20 years. The majority of single adults and families are being dismissed. We are not removing unaccompanied minors from the country," Mayorkas said earlier this month in a statement.

Democrats and Biden also pointed out that the United States regularly experiences spikes of Central American migrants, even under Trump's administration. Meanwhile, Donald Trump said on Saturday night that he expects to visit the border soon, adding that border officials 'asked me to go,' Daily Mail reported.

According to Trump, getting rid of the Migrant Protection Protocol was also a "very bad decision." He also chastised Biden for undoing his "Remain in Mexico" policy. Trump even bragged about his friendship with Mexican President Andrés Manuel López Obrador and mocked Biden for breaking it up. He reported that Mexico had 28,000 soldiers blocking immigrants from entering the US before supporting his iconic border wall.

The former President last went to the border during his final weeks in office, when he went to Alamo, Texas, to mark the construction of more than 450 miles of the border wall. In reaction to Democratic criticism that fencing already existed at the southern border, Trump said the wall is "new" and "top of the line."