Release date of "Space Jam" and some important things everyone must of the sequel starring Lebron James. 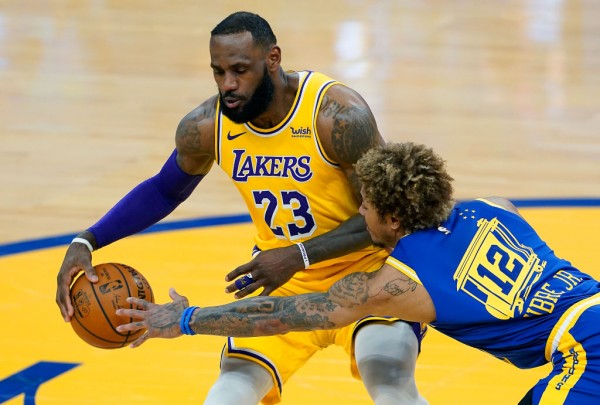 (Photo : Thearon W. Henderson/Getty Images)
LeBron James #23 of the Los Angeles Lakers dribbling the ball is defended by Kelly Oubre Jr. #12 of the Golden State Warriors during the first half of an NBA basketball game at Chase Center.

The long-awaited sequel to Michael Jordan's 1996 film "Space Jam," the "Space Jam: A New Legacy," starring four-time NBA MVP LeBron James will soon be seen. James in this animated movie will be a fictionalized version of himself heading the "Tune Squad" against the "Goon Squad," a team formed by an evil computer algorithm.

According to a published article in the Sporting News, it was questioned if it is possible for James' "Space Jam" film to attract Generation Z as what Michael Jordan's version was to millennials. That remains to be seen, but it is fair to conclude that some critics will use these films as fodder for the continuing GOAT controversy because that is what happens all the time.

According to a published article in SYFY Wire, on July 16, 2021, "Space Jam: A New Legacy" will be launched in the United States. It will be seen in standard movie theaters as well as on HBO Max.

In comparison to the first "Space Jam," the sequel would contain characters from other Warner Bros. assets besides "Looney Tunes." The Iron Man, The Flintstones, King Kong, Yogi Bear, and other characters can be seen in the trailer, WKYC reports.

The plot of "Space Jam: A New Legacy"

In this film, NBA champion and global icon LeBron James teams up with Bugs Bunny to embark on an exciting adventure. When a rogue AI traps James and his young son Dom, who aspires to be a video game maker, in a digital environment.

On the court, James must lead Bugs, Lola Bunny, and the rest of the famously unruly Looney Tunes to triumph over the AI's digitized champions: a pumped-up team of basketball stars like you've never seen them before.

James' View of the Movie

Lebron James said in 2020 that it is not a sequel and he described it as a "family movie." James clarified that it is a parental film in which he is trying to push his son to do things because that is how he was raised and will insist on his son to play basketball.

It deals with his position as a father and supporter of his son, as well as his son's decision to turn off at one point in the film when he was attempting to recover his confidence. Together with Bugs Bunny, Lola, Taz, Tweety, and the rest of the gang.

A New Legacy, which also stars Don Cheadle, Sonequa Martin-Green, and a roster of top NBA players, has Coogler as an executive producer. Cheadle said "a lot of fun to make. I think people are really going to be surprised at how different and original this new one is."