Australia plans to begin developing its own guided missiles in cooperation with the US to enhance defense capability. 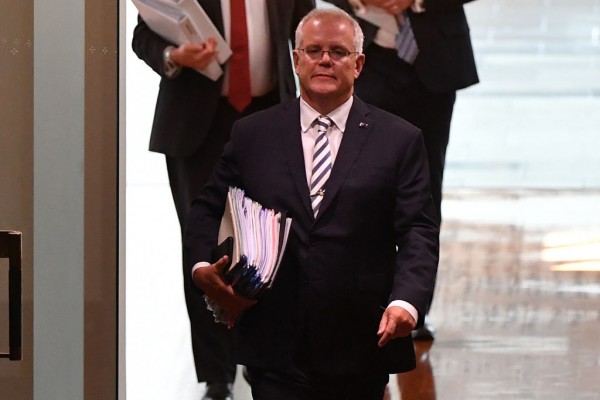 (Photo : Sam Mooy/Getty Images)
Question Time As Parliament Continues CANBERRA, AUSTRALIA - MARCH 25: Prime Minister Scott Morrison during Question Time in the House of Representatives at Parliament House on March 25, 2021 in Canberra, Australia. The federal government was on Monday set back by new allegations broadcast by the Ten Network after pixelated images of unnamed Coalition advisers allegedly engaging in performing lewd sex acts on the desks of female MPs resulting in a Morrison staff member being sacked last night. Additionally, the ABC Network aired a first hand account by an Australian Parliament security guard of what she witnessed on the night Brittany Higgins was allegedly raped in the office of then-defence industry minister Linda Reynolds in early 2019.

The federal government proposes to spend AU$1 billion to expedite the building of a guided weapons facility, resulting in the development of a significant defense manufacturing industry. Under the AU$1 billion plan to fast-track a new weapons plant in cooperation with a multinational arms maker, Australia will develop its own guided missiles.

In response to a deteriorating strategic environment, the federal government plans to spend AU$100 billion on missiles and other guided weapons over the next two decades. The development of sovereign capabilities is crucial, Prime Minister Scott Morrison said. "As the COVID-19 pandemic has shown, self-reliance, whether in vaccine development or Australia's defense, is critical to meeting our own needs in a changing global climate," he added.

The declaration is in line with a pledge made during the by-election in Eden-Monaro last year. Labor is in favor of fast-tracking missile guidance systems made in Australia, Daily Mail reported. On Wednesday, Opposition Leader Anthony Albanese said that Australia does need to be more resilient when it comes to our protection, and the announcement is part of that.

Raytheon, Lockheed Martin, BAE Systems, and Kongsberg are among the most possible bidders for the deal. It will allow Australia to replace missiles that had been brought in from other countries. Over the next 20 years, the government estimates that the new plant will produce AU$40 billion in local production and export sales.

White House Accuses China of Obstructing WHO into COVID-19 Origin

Australia to produce its own guided missiles

The Department of Defense will choose a "strategic industry partner" to run the production plant under a contract. According to ABC, the facility's site is yet to be confirmed.

Defense recently announced an agreement with the US to build and test an air-launched hypersonic cruise missile that can fly up to eight times the sound speed. Defense Minister Peter Dutton said that Australia and the United States would collaborate on the proposed domestic guided missile project.

Dutton mentioned that the project would address both Australia's and our most significant military partner's needs. The government plans to spend AU$270 billion on defense programs over the next ten years.

Melissa Price, the Defense Industry Minister, said that locally produced guided missiles would complement Australia's current military technology, including the Nulka decoy missile and explosives factories in Benalla and Mulawa. In the meanwhile, the Prime Minister will elaborate on the decision this morning.

Along with the United States, Canada, the United Kingdom, and New Zealand, Australia is a member of the "Five Eyes" intelligence alliance. The Defense Minister said, "We will work closely with the US on this vital effort to ensure that we consider how our enterprise will better meet both Australia's needs and the growing needs of our most important military ally."

He believed that producing weapons in Australia would not only boost the country's capability. But would also guarantee that the government had enough weapons for military operations if global supply chains were interrupted, as per The AP News.