Human rights abuses against ethnic Uighurs and other Muslim minorities in Xinjiang, China, have been condemned by Australia and New Zealand. However, they have not taken the lead of their foreign partners and imposed sanctions on Chinese officials. Foreign Minister Marise Payne and her New Zealand counterpart Nanaia Mahuta expressed deep concern over an increasing number of Chinese government abuses. 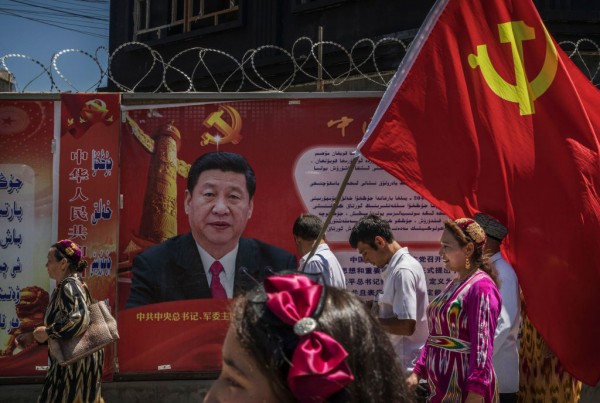 (Photo : Kevin Frayer/Getty Images)
Uyghur Life Endures in Kashgar's Old City KASHGAR, CHINA - JUNE 30: Ethnic Uyghur members of the Communist Party of China carry a flag past a billboard of Chinese President Xi Jinping as they take part in an organized tour on June 30, 2017 in the old town of Kashgar, in the far western Xinjiang province, China.

Restrictions on religious rights, mass surveillance, extrajudicial detentions, forced labor, and sanitizing were all listed by the pair.

They supported the United States, Canada, the European Union, and the United Kingdom for announcing sanctions overnight. In a joint statement, they said, "We respect these countries' profound interests, which the Australian and New Zealand people share." Since news about the Xinjiang detention camps started to circulate in 2018, the trans-Tasman nations have urged China to protect Uighurs and other religious and ethnic minorities' human rights.

"Today, we emphasize the importance of openness and accountability, and we reiterate our call on China to allow UN experts and other independent observers substantive and unrestricted access to Xinjiang," the ministers said. Later, the Chinese embassy referred to Australia's Xinjiang statement, accusing it of interfering and double standards.

According to Daily Mail, the embassy slammed Australia's human rights record once more. "We call on the Australian government to stop criticizing China, to stop interfering with its domestic affairs, and to stop applying double standards on human rights," they added.

The United States, the European Union, Canada, and the United Kingdom jointly enacted sanctions on senior Chinese officials over suspected human rights abuses in China's far-western Xinjiang region, prompting China to call foreign diplomats in response. According to Chinese Foreign Ministry spokesperson Hua Chunying, the latest sanctions are a "slander and an affront to the Chinese people's integrity and honor." That came just hours after China's and Russia's foreign ministers condemned a recent round of human rights abuse and sanctions against both countries.

Wang Yi of China and Sergei Lavrov of Russia also dismissed outside criticism of their authoritarian political regimes at a news conference in the southern Chinese city of Nanning. They said they were seeking to advance global progress on topics ranging from climate change to the coronavirus pandemic.

Members of the Uyghur and other Muslim ethnic communities in Xinjiang have actively participated in work training and deradicalization courses, as per China. More than a million people have been detained in prison-like reeducation camps. They are forced to reject their native culture and swear allegiance to the ruling Communist Party and its leader, Xi Jinping, based on the reports.

Abuses, such as forced labor and coercive birth control, are underway, as claimed by media outlets, international governments, and activist groups. Australian and New Zealand governments have expressed deep concern about the increasing number of credible allegations of severe human rights violations in Xinjiang. The two countries, whose economies depend heavily on China's trade, have not imposed sanctions, ABC News reported.

China Seeks Meeting with the US If Alaska Discussions Go Well

As European leaders avoided being dragged into former U.S. President Donald Trump's trade, infrastructure, and human rights disputes with China, it looked to Europe as a friendly ally. The picture was broken on Monday when the European Union joined the United States, the United Kingdom, and Canada in placing sanctions on Chinese officials accused of abusing ethnic minorities. Beijing retaliated by declaring that four European representatives and a German researcher will be sanctioned.

The timing is important, just two months after Trump, who despised the trans-Atlantic partnership, was replaced by Joe Biden, who intends to shape an alliance to confront China. The sanctions are the EU's first against China since Beijing's 1989 crackdown on Tiananmen Square's pro-democracy campaign.

Europe's change comes in the face of mounting trade and human rights grievances that have soured perceptions toward China. Hungary and Greece rejected previous attempts to condemn China's human rights record, likely to avoid damaging trade and investment relations, as per the Independent. As President Xi Jinping's government pursues more assertive trade and strategic measures, the dispute represents a downturn in China's relations with the West and Asian neighbors, including India.