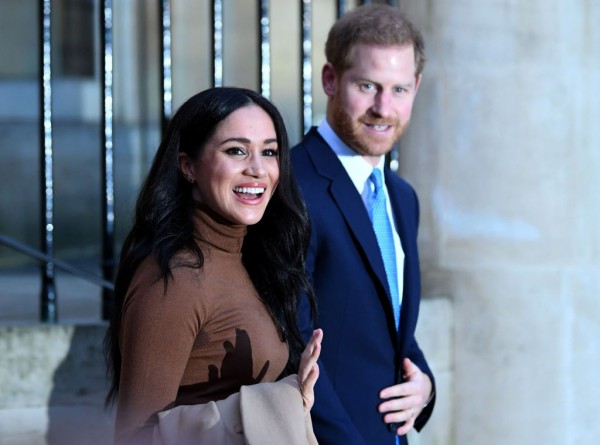 (Photo : DANIEL LEAL-OLIVAS - WPA Pool/Getty Images)
The Duke And Duchess Of Sussex Visit Canada House LONDON, UNITED KINGDOM - JANUARY 07: Prince Harry, Duke of Sussex and Meghan, Duchess of Sussex react after their visit to Canada House in thanks for the warm Canadian hospitality and support they received during their recent stay in Canada, on January 7, 2020 in London, England.

However, according to a paper obtained by The Sun from the General Registrar's Office, there was only one wedding between Prince Harry and Meghan Markle, and it indeed took place on May 19 of that year at the Windsor Castle. The official who drew up the couple's wedding license dismissed Markle's revelation, as per the news outlet.

A former chief clerk at the Faculty Office, Stephen Borton, told The Sun that Meghan Markle is obviously confused and misinformed. Borton added that she and Prince Harry did not marry in front of the Archbishop of Canterbury.

Markle revealed that she and Prince Harry called the Archbishop, the Most Rev. Justin Welby, during their interview with Oprah and begged him to marry them privately at their home in Nottingham Cottage. Borton slammed the brakes on their claim.

The former chief clerk explained that the Duke and Duchess of Sussex could not marry as Nottingham Cottage is not a licensed location, and there were not enough witnesses. Therefore the ceremony was not valid, Borton said.

The certificate, which lists Harry as single and his occupation as a Prince of the United Kingdom, costs around $58 and lists Markle as divorced and an actress. Meanwhile, the Archbishop's spokesperson refused to comment to The Sun on personal or pastoral issues, Page Six reported.

Harry, Meghan only had a conversation in the garden with the Archbishop

Official documents reveal that Meghan Markle and Prince Harry were married at Windsor Castle, not in the back garden wedding they described to Oprah Winfrey. The Duchess of Sussex said she "got married" three days before the wedding at St. George's Chapel in a private ceremony with only Archbishop of Canterbury Justin Welby.

The assertion was soon called into doubt in the United Kingdom due to legislation requiring two witnesses for a marriage to be legitimate, as per Newsweek. "2018 Marriage solemnized at The Queen's Free Chapel of St. George in the Parish Of Within Her Castle at Windsor in the Royal Borough of Windsor and Maidenhead," according to the document obtained by The Sun.

It notes the date as May 19, 2018, the same day that thousands of people lined the streets of Windsor to watch the royal wedding on large screens and wave as Prince Harry and Meghan's carriage went by. Reverend Mark Edwards, a vicar of St. Matthew's Church in Dinnington and St. Cuthbert's Church in Brunswick, told ChronicleLive that he had contacted Lambeth Palace to clarify things. He said that he was told: "Justin is not available for private weddings. Meghan is an American who has no idea what's going on."

Edwards added that the person said Justin only had a private conversation with Prince Harry and Meghan Markle in the garden regarding the wedding. But the person strongly claimed that there was no wedding taking place until the televised national event. According to the BBC, the pair and the Archbishop of Canterbury celebrated a backyard ceremony, but it was just a casual exchange of vows and not a legitimate wedding.