Prince Harry and Meghan Markle's bombshell TV interview with Oprah Winfrey has apparently left Queen Elizabeth II "sad" rather than "angry," but she has secretly promised to help her grandson. During their interview with Winfrey, Harry and Markle made several shocking claims, including that an unnamed member of the royal family had expressed "concerns" over the skin color of their son Archie, who has yet to be born then. 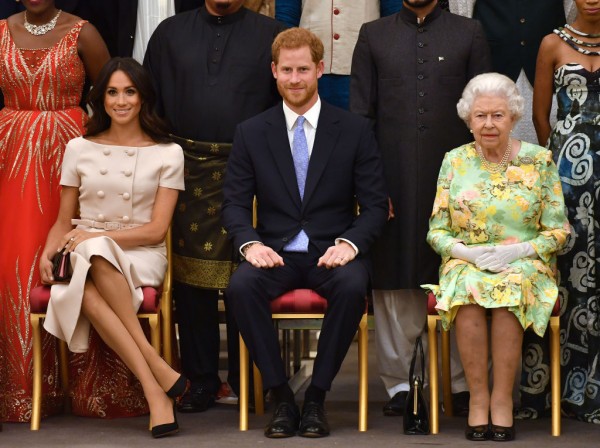 According to The Sun, the 94-year-old queen ordered a private family probe into the allegations as she took personal charge of resolving the bitter rift revealed in the tell-all. The Queen, who is privately said to be not angry with the Sussexes, whom she has described as "much respected family members," is "not mad, she is just sad," a source told the news outlet. "They've always been concerned about Prince Harry, and Queen Elizabeth II is very protective of him," the source told The Sun.

"When Meghan came along, they wanted to be supportive of him. When Meghan arrived on the scene, they were all less concerned about him because he seemed to be in such good spirits," the source said. After the sensational CBS News interview, TV host and Markle pal Gayle King said Harry has spoken to his father, Charles, and brother, William, but that their conversations have been "not productive" so far. During the interview, Prince Harry confirmed that he and his grandmother had a "pretty good" relationship and often talked.

"The entire royal family is shocked to hear the full extent of how difficult the last few years have been for Harry and Meghan," Buckingham Palace said in a statement after the interview. The issues posed, particularly the one of race, are troubling. Although some recollections may differ, they are all taken seriously and discussed personally by the family, as per Page Six.

Meanwhile, Daniel-Portley Hanks, a private investigator based in Los Angeles, said that he was paid by the tabloid, "The Sun," to dig up information on Markle before she became the Duchess of Sussex. According to Byline Investigates, Hanks collected information illegally. He gained access to a password-protected website and published a 90-page article on the duchess for publication in the tabloid.

This included the duchess's and her relatives' contact numbers, social security numbers, and background checks on her previous intimate relationships and family members. On Oct. 30, 2016, he delivered the article at the request of The Sun's U.S. editor James Beal, who was based in New York at the time.

During this time, the romance between Prince Harry and Meghan Markle first made headlines, The International Business Times reported. As the tabloid's quest for a story involving the former "Suits" star failed, they resorted to distant relatives with hatreds against Markle's success.

The press then brushed aside the lengthy article and reported it, citing an "anonymous friend" as a source. Hanks also took pictures of Markle's West Hollywood home for the reporters and paparazzi to spy on the tabloid orders.

Emily Andrews, the publication's royal correspondent, wrote the first-ever report on the couple. But, as she told Byline Investigates, she never met Hanks. "I've never been a part of the decision to recruit him or give him a job. I was completely unaware of his presence with all of the issues you mention. It would be entirely incorrect to say, imply, or conclude otherwise."

Meanwhile, the retired investigator apologized to Meghan Markle and Prince Harry for the invasion of privacy, saying, "I'm sorry to Meghan Markle and Prince Harry for targeting her family, including her father, on behalf of The Sun." He also apologized to Queen Elizabeth II for allowing the newspaper to intensify the Royal Family's rift, acknowledging that the damage he caused affected the whole family.