During Pope Francis' visit, a rebel group linked to a recent rocket attack on U.S. forces in Iraq has called a ceasefire, a grudging suspension of hostilities that hints at the papal tour's strategic significance. 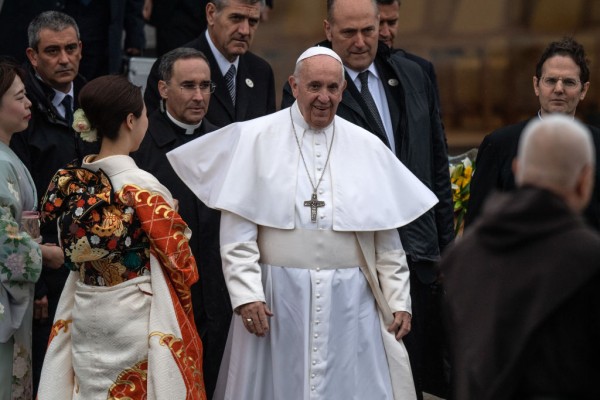 (Photo : Carl Court/Getty Images)
TOKYO, JAPAN - NOVEMBER 26: Pope Francis is bade farewell as he prepares to board his plane before leaving Japan on the final day of his four day visit on November 26, 2019 in Tokyo, Japan. Pope Francis has made only the second ever Papal visit to Japan where he visited Nagasaki and Hiroshima before travelling to Tokyo to meet with newly-enthroned Emperor Naruhito and Prime Minister Abe as well as holding Mass at Tokyo Dome.

The commitment provides some comfort as the Pope travels through territories roiled by attacks from Iranian-backed militias. The Guardians assumed responsibility for a rocket attack on Erbil last month, which President Biden responded to by bombing a Syrian base used by Iranian forces and their proxies.

New Lines Institute senior analyst Rasha al Aqeedi, an Iraqi national who hails originally from Mosul, said, "They would not escalate during a visit like this because it would backfire immensely." The analyst added that any violence amid Pope Francis's visit would endanger his life and would severely backfire on them, resulting in being blacklisted everywhere, Washington Examiner reported.

The Pope's visit will take him to Iraqi regions where Iranian-backed forces have shown their resolve, including Erbil, a recent barrage site. He will fly to Najaf, a holy city for Shia Muslims, on Saturday to visit Grand Ayatollah Ali al Sistani, the Shia Muslim world's most respected official. According to the Guardians ' letter, the truce is intended to show our gratitude to Imam al-Sistani since we are Arabs and honor the guest.

Nonetheless, the militants' public rhetoric clarified that the papal visit poses a threat to Iran's status in Iraq. Sistani opposes the Iranian revolution's understanding of "wilayat al-faqih," a jurisdictional rule - Ali Khomeini's theology, which asserted the right to exert not only divine but also political control over "the administration of the land." On the other hand, Sistani follows a "quietist" tradition that rejects the government's clerical domination.

In short, the compulsion to "respect" the Pope's meeting with Sistani puts the Iranian-aligned militias in the position of honoring an encounter between the Roman Catholic leader and the Shia teacher, whose example poses a challenge to Iranian ambitions in Iraq.

The Iranian Revolutionary Guards Corps' proxies are openly critical of the visit, especially the Pope's intention to visit Ur, Abraham's birthplace, for an interfaith service of "prayer for the sons and daughters of Abraham," a reference to Abraham's role as a foundational prophet in Judaism, Christianity, and Islam, as per Reuters.

According to Wall Street Journal, Kata'ib Hezbollah spokesman Abu Ali al-Askari wrote on social media on Wednesday, "We must not be overly optimistic about Pope Francis' visit and that he will make our lands cool and safe." He added before congratulating that there is a conspiracy in Ur City under the facade of interfaith dialogue. Besides, he acknowledged the "resistance" fighters for the recent U.S. forces attack at the Ein Al-Asad base in Iraq.

On his first papal visit to Iraq on Friday, Pope Francis called for an end to extremism and violence, as per The Telegraph. The head of the world's 1.3 billion Catholics emphasized the relevance of Iraq's strong Christian heritage at the Iraqi presidential palace. In a country that Transparency International has regularly rated as one of the most corrupt, he also urged Iraqi officials to fight the menace of corruption, misuse of power, and disregard for the constitution.

As he descended the red-carpeted stairs at Baghdad airport, an honor guard dressed in red coats and white plumed helmets flanked the red carpet, where a huge delegation greeted the 84-year-old pontiff. The Pope then sat with Iraqi Prime Minister Mustafa Al Kadhimi at the airport before meeting President Barham Salih later.

Read also: WHO To Throw Away Interim Report Plans on COVID-19 Origin Investigation