On Saturday, a tiny number of Afghan women braved the Taliban-controlled streets of Kabul once again to demand equal rights and the opportunity to have roles in the government. 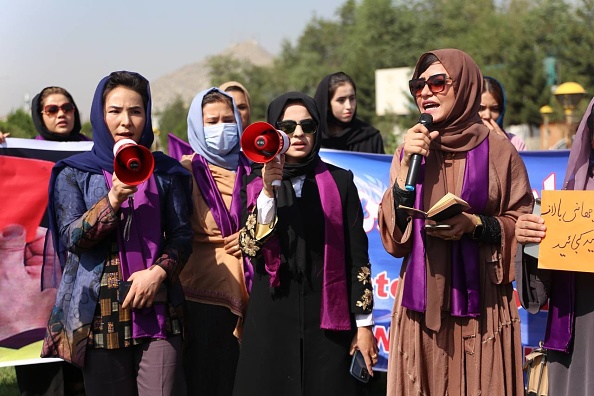 (Photo : Bilal Guler/Anadolu Agency via Getty Images)
A group of women stage a rally calling on the Taliban to ensure equal rights in the country and allow them to be contributing members of Afghan society.

In a recently published article in CNN News, on Saturday, Taliban guards and some of the ladies got into a fight. In the video, a guy with a megaphone tells the tiny audience that their message will be passed on to the elders. His tone seems to be soothing. Women can be heard screaming towards the conclusion of the video, with one activist exclaiming, "Why are you hitting us!"

A video of Afghan activist Narjis Sadat bleeding from the head was extensively circulated on social media, with the allegation that she was assaulted by militants during the demonstration. Sadat has been contacted by a major news organization for comment, according to a published article in DW.

Taliban officials have rejected footage of violence during women-led demonstrations that have been circulated on social media. According to Muhammad Jalal, the chairman of the Cultural Commission, these protests are an intentional effort to create difficulties, and that the individuals involved represent less than 0.1 percent of Afghanistan's population.

The militant organization is still in discussions about establishing a government, but they have warned women to remain at home, and in some cases, militants have even ordered women to quit their jobs, according to a published article in BBC News.

Furthermore, the actions contradict pledges made by the rebel group's leaders, who have said publicly that women would play a major part in society and will have access to education. However, the group's public comments about sticking to its version of Islamic principles have fanned concerns of a return to the Taliban's harsh rules, which saw women virtually vanished from public life two decades ago.

In another report, fighting has persisted in the Panjshir Valley, north of Kabul, where resistance forces have been resisting Taliban takeover attempts. However, there was a claim and a counter-claim. The Taliban claim to have seized control of two additional districts and are on their way to the province's center.

Heavy combat is still going on, according to a spokesperson for the National Resistance Front of Afghanistan (NRF), and hundreds of Taliban have been encircled. The Panjshir Valley, which is home to between 150,000 and 200,000 people, was a hotbed of resistance during the Soviet occupation of Afghanistan in the 1980s and throughout the Taliban's prior reign, according to a published report in FOX5 Vegas.

Ahmad Massoud, the NRF's head, hailed women's demonstrations in Herat and vowed Panjshir will continue to fight. However, none of the NRF's or Taliban's allegations could be independently confirmed.

Related Article: Afghan Woman Mutilated by Evil Taliban, Had Her Nose, Ears Chopped Off After Trying to Escape