Wide receivers Isaiah McKenzie and Cole Beasley of the Buffalo Bills were penalized by the NFL on Thursday for breaching the COVID-19 protocol. 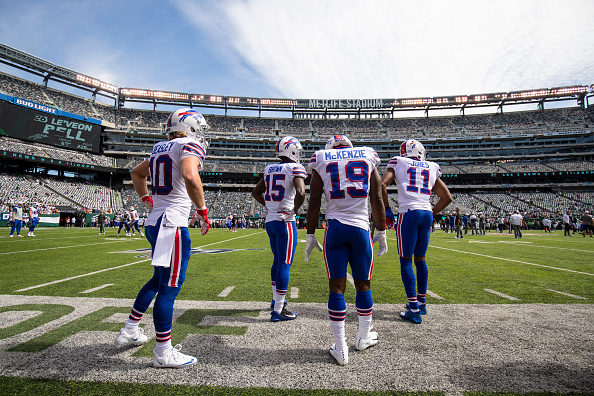 In a recently published article in ESPN, McKenzie shared a photo of the letter he received from the NFL, which included numerous documented procedure breaches. He then tweeted that he had been fined $14,650 for violating NFL's COVID-19 protocol.

Meanwhile, Beasley did not specify how much he was fined, just that he was punished for not wearing a mask for "literally 5 feet" from the entrance door to the locker room after wearing one "all day." The fines given to the players are a manifestation that NFL is indeed serious in implementing its protocols.

Buffalo Bills coach Sean McDermott said on Thursday that for a long time, these norms have been agreed upon, implemented, and well-communicated. As a result, it is critical that they concentrate on being safe and healthy. He also said, "It's no. 1 and always has been no. 1." The second is to remain focused on the purpose for their participation in the league, which is to win, according to a published report in a sports website SI.com.

McKenzie's punishment comes after he failed to wear a mask in the team facility on multiple occasions on Wednesday, once while walking through the indoor fieldhouse into the training room and again in the weight room's meeting area "while gathered near other players after the offensive meeting," according to the league's letter.

In addition to those breaches, the league said it issued him a formal warning on July 27 threatening him with additional punishment, including behavior detrimental, according to a recently published sports article in Bills Wire.

Unvaccinated athletes are obliged to wear a mask around the club facility under the NFL's COVID-19 policy, which the league reminded McKenzie of in its letter on Thursday. McKenzie's behavior is also explicitly forbidden under the Protocols, according to the NFL.

Other Violations of Buffalo Bills

The infractions came after the Bills sent six players home on Tuesday for being close contacts to a vaccinated staff member who tested positive for COVID-19 after being vaccinated. The NFL classified Beasley, Gabriel Davis, Star Lotulelei, and Vernon Butler as close contacts, meaning they must stay away from the facility for five days, according to NFL rules.

Matt Milano and A.J. Klein were both sent home by the Bills for precautionary reasons, but neither was classified as close contact by the NFL so they were permitted to return to practice on Wednesday. Meanwhile, Beasley has been outspoken in his opposition to the NFL's standards for vaccinated and unvaccinated players. On Thursday, he spoke out in favor of McKenzie, according to a report from UPI.

Furthermore, around 81 percent of the squad is completely immunized, according to McDermott. Due to positive COVID-19 testing during the preseason, Buffalo has put three players on the reserve/COVID-19 list, including starting left tackle Dion Dawkins, who was hospitalized for four days as a consequence of the illness.