Despite winning three straight scoring championships, Kevin Durant did not have the best ball use rate on his team but stands alone as the United States men's basketball all-time scorer at the Olympics with 354 points. 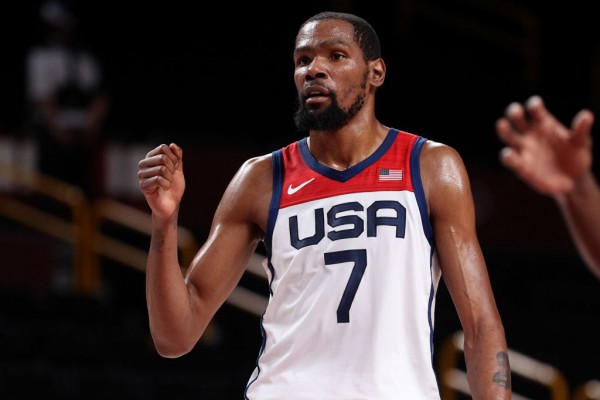 (Photo : Ezra Shaw/Getty Images)
Kevin Durant #7 of Team United States reacts against Czech Republic during the second half of a Men's Basketball Preliminary Round Group A game on day eight of the Tokyo 2020 Olympic Games at Saitama Super Arena.

In a recently published article in MSN News, the 32-year-old was only one point shy of Anthony's all-time record of 336 points before Saturday's match against the Czech Republic. He had 23 points, eight rebounds, and six assists in the 119-84 victory for the United States.

Kevin Durant, who was the top scorer for the gold-medal winning teams in both London and Rio, is competing in his third Olympics. If the United States wins gold in Tokyo as well, Durant will equal Anthony's three Olympic gold medals in men's basketball.

The Americans' victory against the Czech Republic was their second consecutive blowout after losing their Olympic opener to France. They progress to the elimination stage, which starts on Aug. 3 with the quarterfinals, but the first of those four games will take place on Monday, Aug. 2 at 9 p.m. Eastern Time, according to a published article in Yardbarker.

The two-time NBA champion has a career field-goal percentage of 49.4 percent and a free-throw percentage of 88.3 percent. Durant now sits in ninth place on the all-time postseason scoring leaderboard. During his time with the Oklahoma City Thunder, where he was drafted, KD has won four scoring championships. Despite becoming the scoring champion, Durant's usage rate on his own team was not the greatest, according to a published article in The Sports Rush.

Durant's former Warriors coach Steve Kerr was reported earlier this year as stating that KD was probably more talented than Michael Jordan. The former Oklahoma City Thunder star is undeniably one of the most efficient and talented players of his stature.

Related Article: Olympic Gold Medalist Caeleb Dressel Admits He Does Not Keep His Medals, Here's Why