President Joe Biden was heckled at a campaign event in Virginia on Friday but brushed it off while raising support for former Governor Terry McAuliffe, who is running for re-election later this year. 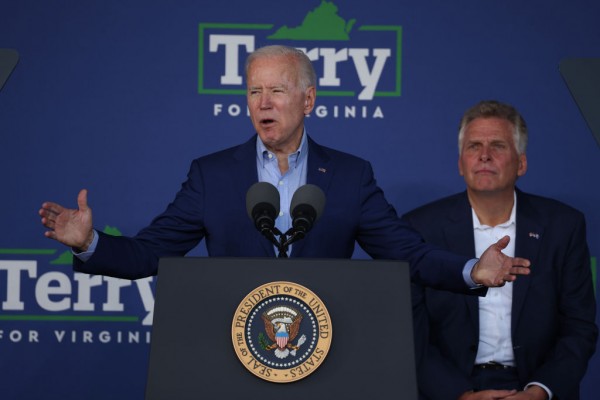 In an aggressive return to the campaign road on Friday, President Joe Biden chastised former President Donald Trump for calling Capitol rioters "beautiful peaceful individuals" and highlighted his 2020 election victory as he supported Virginia gubernatorial candidate Terry McAuliffe, according to a published article in Newsweek.

Biden said during a campaign rally for McAuliffe in Virginia that "We just have to keep making the case just as the Republican Party today offers nothing but fear, lies and broken promises," He also added that it is strange to think of going on the news every day and watching a repeat of what occurred on January 6 and hearing people claim it was a bunch of 'beautiful, peaceful individuals.'"

Meanwhile, it was Biden's first in-person candidate-specific event since taking office in January. It was his most forceful effort to utilize his political clout to defend both Democratic candidates around the nation and his own political future, according to a published report in CNN News.

Biden Linked Himself to McAuliffe

Pres. Joe Biden said he and Terry have a lot of interests. He, like Terry, campaigned against Donald Trump. He also said that he beat Donald Trump in Virginia and that Terry would do the same in the upcoming mid-year election against the gubernatorial candidate of Trump.

Furthermore, to the roughly 3,000 people assembled in a park across the Potomac River, Biden underlined his pandemic response, his administration's economic recovery, and the $1.9 trillion coronavirus relief package, as he underscored the vision for America he shared with McAuliffe.

Biden is Under a Great Pressure

Biden is under a lot of strain. Several presidents before him, including his immediate predecessor and the president he worked under, Barack Obama, experienced severe midterm election defeats, according to a recently published article in MSN News.

The stakes for Democrats are tremendous, given their razor-thin majorities in the House and Senate. A year after Biden's presidential win and a year before the 2022 midterm elections, the Virginia elections will offer a strong indicator of where the political mood is going, especially in the next Presidential election.

McAuliffe's stakes are higher. The former governor of Virginia and veteran Democratic donor is aiming for a once-in-a-generation feat: earning a second term as governor in a state where governors cannot serve consecutive terms. And to do this, he intends to devote a significant portion of his time to tying Youngkin to Trump.

Needless to say, to combat the party's history of midterm defeats, Biden's political operation has launched a two-pronged strategy: work to maintain popular support for the President's legislative priorities while also strengthening the party's top committees, such as the Democratic National Committee, earlier in the political calendar.

Biden has already sent funds from his joint fundraising committee to the DNC, which stated on Thursday that it will spend at least $5 million in Virginia in advance of the 2021 elections.