On Wednesday, the Belgian government said that it has made progress toward ending a hunger strike by several hundred migrants trying to acquire permanent residence so that they may all stay in the country. 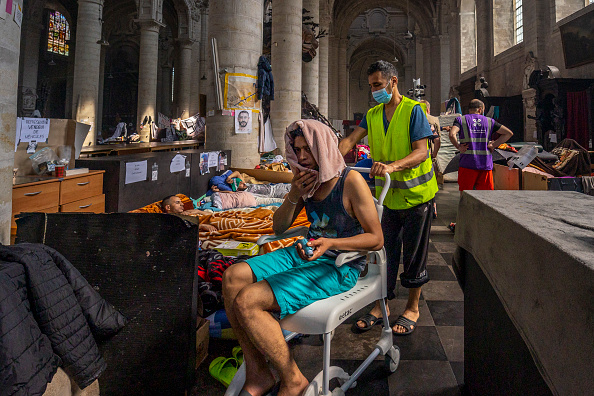 (Photo : Olivier Matthys/Getty Images)
Migrant workers without papers rest in critical condition on day 58 of a mass hunger strike for legal status inside the Church of St. John the Baptist at the Béguinage.

In a recently published article in the Associated Press, Egbert Lachaert, the chairman of Prime Minister Alexander De Croo's Liberal party, stated that under the framework of an agreement, individuals affected would have their cases examined individually in a neutral zone, free of group pressure and without putting lives in danger.

On May 23, migrants in Brussels started a hunger strike at a church and two colleges. After the agreement was revealed, several people were wheeled out of the Béguinage's Church of St. John the Baptist. Activists greeted them with song and enthusiastic applause.

Some migrants have begun rejecting water and food in recent days, raising concerns that they may perish shortly. Tensions within Belgium's coalition government were also sparked by the hunger strike, according to a published report in ABC News.

Number of Migrants Who Launched the Hunger Strike

There were around 475 illegal migrants, mainly from South Asia and North Africa, who began a hunger strike to seek a means to acquire permanent residence in the country, according to a recently published article in a local source outlet Euro News.

Meanwhile, according to United Nation authorities, 150,000 migrants reside without permission in Belgium, a country with a population of 11.5 million people. They claim that individuals who wish to legalize their status are discouraged from doing so because they are afraid of being deported if they apply.

Hunger strikers, according to State Secretary of Migration Sammy Mahdi, must submit individual residence petitions. He seemed to maintain his stance that a collective grant of residence for all hunger strike participants was not an option.

Undocumented Migrants Have Been on Hunger Strike for Nearly Two Months

In a recently published article in Reuters, undocumented migrants have been fasting for almost 60 days in the aim of getting residency papers at a prominent Brussels church and university facilities. Concerns about their situation have grown, especially after several began rejecting water on Friday.

UN special rapporteur on human rights and extreme poverty, Olivier De Schutter said "The information we have received is alarming and several of the hunger strikers are between life and death."

Tension Escalates Within the Government Officials

The government is in jeopardy as a result of the escalating political squabble, which began when the Socialists threatened to leave the seven-party coalition. A deputy prime minister, Pierre-Yves Dermagne, said he and other Socialist officials would resign if any of the hunger strikers died.

Moreover, Sammy Mahdi, Belgium's minister for asylum and migration, has refused to grant a blanket amnesty to all undocumented workers in the country but has established a "neutral zone" near the baroque church where some of the hunger strikers are being housed, where they can receive information on how to obtain residency status.

Furthermore, De Croo has expressed complete confidence in his minister, while supporters in his Flemish liberal party have slammed the prospect of a government collapse as "irresponsible and senseless."