On Saturday, Afghan officials met with Taliban militants in Qatar, with all sides appealing for peace even though violence has escalated and displaced thousands of civilians. 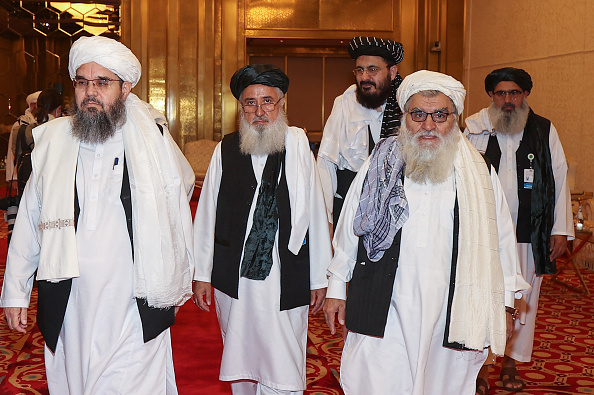 (Photo : KARIM JAAFAR/AFP via Getty Images)
A delegation of Afghanistan's Taliban movement attends a session of the peace talks between the Afghan government and the Taliban in the Qatari capital Doha

Negotiators Between Two Parties Attempt to Have Peace Talk Progress

In a recently published article in the U.S. News, Negotiators have been meeting in Doha since September but have yet to make any headway, even though time is running out before the complete withdrawal of Western forces on September 11.

As US-led international troops leave and the Taliban begin offensives across Afghanistan, seizing districts and border crossings while surrounding provincial capitals, the war has taken a turn for the worst.

Abdullah Abdullah, head of the government's High Council for National Reconciliation, said during new high-level talks intended to last two days "Let's take important steps to continue the peace process, to prevent the killing of the people," according to a published article in News Block.

However, the Taliban's deputy commander and negotiator, Mullah Abdul Ghani Baradar, expressed sorrow over the lack of progress and said that there is still hope and that the Taliban would make efforts for good results in the negotiations.

According to local authorities, approximately 12,000 people in northern Takhar province have been forced to leave their homes as violence continues. With limited supplies, many people congregated at a school in the provincial capital, according to a published news report in the Times of India.

Heavy combat has erupted in southern Kandahar province, and the Taliban captured Spin Boldak, a border crossing with Pakistan, earlier this week, but the Afghan government claimed on Friday that it had recovered control of the gate.

According to the UN's humanitarian agency, more than 2,000 people have been displaced in Kandahar this month, and Kandahar's provincial governor imposed a nighttime curfew in Kandahar city on Friday evening owing to the fighting.

Other Important Infomation About the Peace Talk

In a recently published report in Al Jazeera, the two parties have been meeting on and off in the Qatari capital for months, but the negotiations have stalled as the armed group's military advances have coincided with Western troops' departure from Afghanistan.

Its stated goal is to assist the government's negotiating team in moving the deadlocked negotiations forward. They were accompanied by representatives from the Taliban's Doha political office. Najia Anwari, a spokeswoman for the Afghan government's negotiating delegation in Doha, told a news agency that discussions will continue on Sunday after the hour-long session on Saturday.

The spokesperson for the Afghan government delegation, Fraidoon Kwazoon, said that talks are the key to ending the war in Afghanistan and that peace may be achieved via communication. Taliban spokesperson Mohammad Naeem, for his part, said the organization has consistently stated its willingness to engage in discussion and talks.

As the Peace Talks continue, the Taliban have used the last phases of the US and other foreign forces' departure from Afghanistan to launch a series of lightning offensives throughout the nation. After beginning an offensive to recapture the crucial southern border crossing with Pakistan, Afghan troops fought with Taliban militants in Spin Boldak on Friday.