Auguste Bartholdi's little bronze statue will travel from Paris to New York City and then to Washington, D.C. 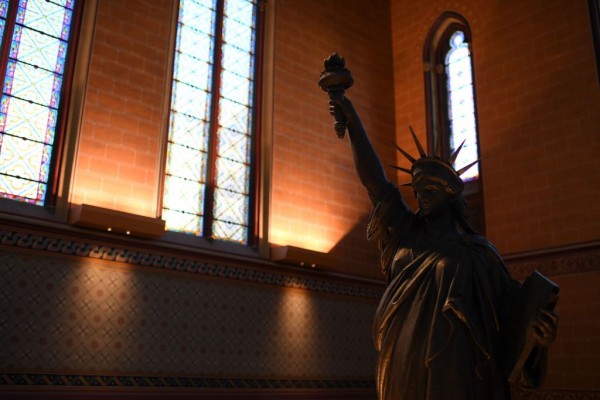 (Photo : Pascal Le Segretain/Getty Images)
Statue "Liberty enlightening the world", model in bronzed plaster, produced and signed by Bartholdi is seen at the nave of the church of the Conservatoire National des Arts et Metiers.

Voyage of the mini replica of the Statue of Liberty

In a recently published article in The Associated Press, a nearly 10-foot replica of the Statue of Liberty was set to sail onboard a container ship from a French Port on Monday. The replica was made using the original plaster wax.

Later this month, the bronze statue will sail across the Atlantic Ocean on a container ship from the French port of Le Havre to Baltimore. It will subsequently be shipped to the United States, where it will arrive in time for the July 4th celebrations.

According to a published article in Yahoo News, before arriving in the nation's capital, the statue will make a stop on New York's Ellis Island to celebrate the Fourth of July with the original statue that welcomed immigrants to the United States in the early twentieth century.

Read Also: Top 10 Must-See Places in the US

French ambassador says the replica is a sign of friendship

French ambassador Philippe Etienne wrote, "I am truly honored to receive this symbol of the friendship of the French and American peoples," according to an email he sent to a national news outlet Fox News. He also added that the replica of the Statue of Liberty that is set to arrive in the U.S. this month has a significant value. It is a symbol that that "enlightens the world" and has "a value that's still so necessary."

Meanwhile, Liam Wasley, a U.S. Embassy representative, said the monument not only represents liberty but also "the depth of our connection" with France. He said this during the ceremony in Paris, according to The Associated Press.

Some important details about the replica of the Statue of Liberty

Before it was determined that the replica would call Washington, D.C. home, The 1,000-pound statue has been on exhibit for a decade at the Musée des Arts et Métiers, a French industrial design museum in Paris, as a temporary home.

According to an article published in The New York Times, Susse Fondeur, a French foundry, created the reproduction by using a "lost wax process" to replicate the statue's minute features.

It has been 135 years since the first Statue of Liberty was unveiled to the public on Ellis Island. From 1886 through 1924, the 305-foot monument welcomed approximately 14 million immigrants who entered the United States through New York.

Additionally, The Statue of Liberty was given to the United States by France in 1885 as a symbol of Franco-American friendship. The statue, designed by sculptor Auguste Bartholdi, was intended to symbolize America's welcoming of immigrants and refugees. With Gustave Eiffel's assistance, he built the bigger replica in New York Harbor.

Olivier Faron, general administrator of Conservatoire National des Arts et Metiers also said "Franco-American friendship will be marked under the sign of liberty. A new era in relations between France and the United States will open up, that's what we want," according to a published report in Reuters.