Australia Has the Best Economy in the World, New Figures Reveal

The International Monetary Fund's upgrade of Australia's economic forecast shows that the country has surpassed all other advanced economies over the past year, according to Treasurer Josh Frydenberg. The IMF expects Australia's economy to expand at a rate of 4.5 percent this year and 2.8 percent in 2022. The Washington-based company estimated that the economy would grow by 3.5 percent in 2021. 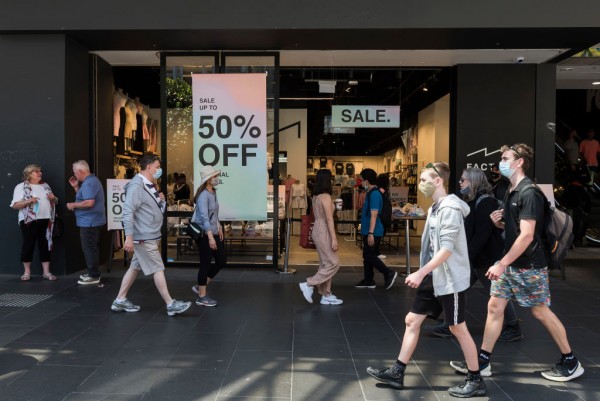 (Photo : Naomi Rahim/Getty Images)
Australians Celebrate Boxing Day Under COVID-19 Restrictions MELBOURNE, AUSTRALIA - DECEMBER 26: Shoppers at Factorie on Bourke Street Mall during the Boxing Day sales on December 26, 2020 in Melbourne, Australia. Australians celebrate Boxing Day with many taking advantage of the post-Christmas sale prices in what is usually the busiest day of the year for retailers in Australia. Extra safety protocols have been introduced this year, due to the ongoing COVID-19 pandemic.

"What this report confirms is that over the last year, we've surpassed all global advanced economies. Despite the fact that there is already a long way to go, Australians can see the light at the end of the tunnel," Frydenberg said on Wednesday.

In its most recent World Economic Outlook, the IMF forecasts a more significant rebound for the global economy in 2021 and 2022 than it did in January. In 2021-2022, the world economy is forecast to expand by 6 percent and 4.4 percent, respectively, compared to 5.5 and 4.2 percent previously, as per Daily Mail.

However, the fund warns that these forecasts are surrounded by uncertainty, with many potential downside and upside threats. Despite the Reserve Bank's attempts to improve the economy by lowering interest rates to historic lows, the IMF expects Australian inflation to stick below the central bank's two to three percent target range by the end of next year.

The economy in Australia will recover this year from COVID-19

The economy in Australia is projected to rise more than previously forecasted for 2021. Yesterday, the IMF revised its outlook for global economic development in 2021. It has boosted Australia's GDP growth outlook to 4.5 percent, The Motley Fool reported.

It suggests that despite a 2.4 percent drop in GDP in 2020 due to the pandemic, Australia will rebound this year. In 2021, the global economy is expected to expand by 6 percent outside of Australia. After a turbulent 2020, Australia's economy seems to be stabilizing. The official cash rate at the Reserve Bank of Australia stands at 0.1 percent. It is not expected to be lifted until late 2023 at the earliest.

According to the Sydney Morning Herald, RBA governor Philip Lowe has announced that there will be no lifting of interest rates until inflation is between 2 and 3 percent. Inflation in Australia is expected to hit 2 percent by 2024, according to the IMF. It estimates Australia's GDP growth will decline in the coming years. Its GDP growth is expected to be 2.8 percent in 2022, 2.3 percent in 2023, and 2.2 percent in 2024. In contrast, Australia's GDP expanded at a rate of 2.1 to 2.8 percent between 2013 and 2019.

The IMF forecasts that low-income countries' economies will struggle the most in the coming years. It also estimates that the global economy will rise by 6 percent in 2021, with those hardest hit by the coronavirus pandemic leading the way. India is one of the economies that the IMF predicts will rise the fastest in 2021. It is expected to increase by 12.5 percent in 2020, after an 8 percent decline in 2020.