Boris Johnson's plan to adopt COVID-19 vaccine passports for British citizens is now in jeopardy, with Labor seeking to vote it down with Tory rebels. 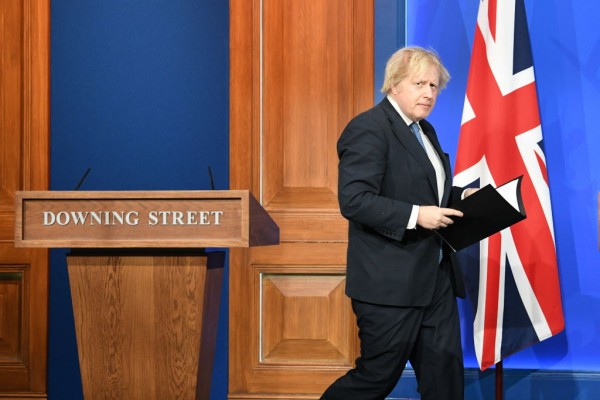 (Photo : Stefan Rousseau-WPA Pool/Getty Images)
Boris Johnson Provides Update On Covid-19 Lockdown Easing LONDON, ENGLAND - APRIL 05: Prime Minister Boris Johnson, arrives for a media briefing on coronavirus (Covid-19) in Downing Street on April 5, 2021 in London, England. The UK is set to allow a wide range of businesses to reopen across England on April 12, including non-essential shops, barbers and outdoor hospitality venues. Such businesses have been closed since December, to curb a surge in Covid-19 infections.

Jonathan Ashworth, the shadow health secretary, said the scheme risked being "discriminatory" and "unfair," and accused Prime Minister Theresa May of trying to be "honest" with the public on how it would operate. By the back door, he dubbed the blueprint a "digital ID card," and said the fact that shops and bars might demand evidence of a vaccine as a condition of entry is a major concern.

The intervention would be a huge embarrassment for No 10; a massive mutiny is already brewing on the Conservative benches, with ministers confirming that the initiative will be put to a parliamentary vote. So far, 41 Tories have signed a letter labeling vaccine passports "divisive and discriminatory," jeopardizing the government's 87-seat majority and suggesting that it might require opposition help.

Ashworth said that ministers were "at sixes and sevens" about the plan and that the PM's evasive press conference appearance last night demonstrated that he "couldn't justify his own policy." Labor chief Sir Keir Starmer is expected to reject the Government's vaccine passport proposals in their current form, according to reports, and instead insist on having everyone vaccinated.

"Based on what we've seen and discussed with officials, we denounce the government's proposals for domestic vaccine passports," a party source told Politico. The left-wing faction will join up with Tory backbenchers and the Lib Dems to vote against the plan, as per The Sun. "Trying to incorporate these domestic vaccine passports by the back door by connecting them to eliminating social distancing rules just won't be acceptable," said Mark Harper, chairman of the COVID Recovery Group.

The records would not be used to determine access to public transportation or essential stores, according to the government. 'It is possible that COVID-status certification may also play a role in minimizing social distancing criteria in other areas where people appear to travel more often, such as hospitality settings,' according to the findings.

Although many Conservative MPs support the use of the records for foreign travel, many are concerned about their privacy and civil liberties as they are used domestically, Daily Mail reported. In an interview with The Telegraph last week, Sir Keir expressed his concerns about the documents' possible use in everyday life.

When asked if he wanted to vote against domestic vaccine passports during an appearance on BBC Breakfast this morning, Ashworth went even further. 'I am not going to accept a plan that says that if anyone wishes to go into Next or H&M in my Leicester constituency, they have to produce a vaccine certificate on their phone on an app,' he said when asked again if he would vote against the proposal. 'That, in my opinion, is discriminatory.'