Mitch McConnell, the Republican leader in the US Senate, slammed big companies for criticizing Georgia's controversial new voting laws on Monday, telling top executives to "stay out of politics."

Mitch McConnell warns companies not to be involved with politics 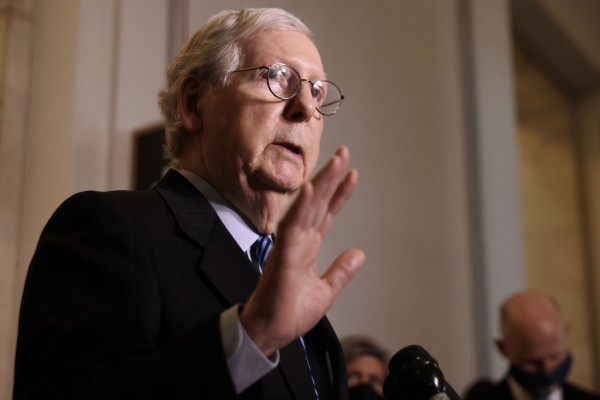 Republicans are disappointed at the number of political influence companies wield in the United States and are proposing tax hikes as retaliation. On Tuesday, Senate Minority Leader Mitch McConnell said, "My warning to corporate America is to stay out of politics," before adding: "I'm not talking about political contributions."

The threat came when large companies such as Delta, Coca-Cola, and Major League Baseball condemned and withdrew their businesses from states with discriminatory voting rules in protest. The MLB has agreed to move the 2021 All-Star Game from Atlanta due to the recent backlash over Georgia's current GOP-authored election laws. This restricted the sale of snacks and beverages to voters waiting in line, reduced the absentee ballot request period, and forbid mobile voting precincts unless the governor declares an emergency.

In a statement released Monday, McConnell accused the MLB and other companies of economic blackmail and cautioned that they might face drastic consequences if they responded negatively to the current, restrictive voting laws. Republicans have called for boycotts of these companies and are also urging state officials to punish them by their tax codes, Fortune reported.

The Georgia House voted to terminate a gasoline tax break for Delta after CEO Ed Bastian called the new Georgia voting laws "unacceptable." The break stayed in effect when state senators chose not to take up the measure.

McConnell isn't the only Republican criticizing the new laws, as per The Independent via MSN. Any Republican lawmakers have already suggested boycotts of certain major brands. Following the company's public rejection of the bill, members of the Georgia House Republican Caucus demanded that the Georgia Beverage Association president ban all Coca-Cola products from an office suite.

McConnell warned big companies of "serious consequences" if they took sides by the party's stance. "If companies become a platform for far-left mobs to hijack our country from beyond the political order, significant consequences will follow," he said, according to Reuters.

The new voting law, which was enacted in the aftermath of Democrats' narrow losses, makes significant improvements to electoral procedures, rendering absentee voting more challenging. State and local election officers lose authority under the statute, which is given to the legislator. It makes it illegal to offer food, drink, or other benefits to voters standing in long lines at polling places.

McConnell has been a strong proponent of corporate political speech rights for the last 30 years, as per HuffPost. He has brought cases and amicus briefs in the Supreme Court defending corporate speech rights, and he has delivered impassioned speeches on the Senate floor.

McConnell, in particular, has lobbied tirelessly to shield businesses and rich campaign donors from political backlash for their political positions, as he did again on Monday. This is most evident in McConnell's decade-long fight against efforts like the DISCLOSE Act, which would mandate nonprofit organizations to disclose donations made to independent electoral political campaigns.

Since the Supreme Court's Citizens United decision in 2010, the so-called "dark money" that the DISCLOSE Act would expose erupted. According to McConnell, the drive to demand disclosure in campaign donations is merely a means for his rivals, the Democrats, to bully companies and rich donors for exercising their free speech rights.