Mitch McConnell warned President Joe Biden that Republicans will resist his $2 trillion infrastructure plan 'every step of the way,' and that his administration is 'left-wing' and headed in the wrong direction. 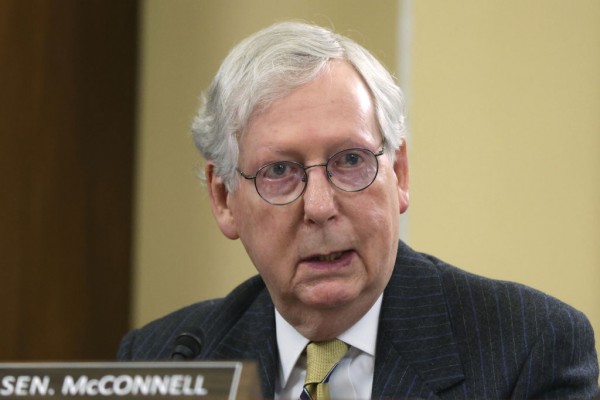 On Thursday, Senate Minority Leader Mitch Mcconnell told reporters that he likes Biden "personally" and that they have been friends for a "long time." However, he said that the voters did not grant his White House a 'mandate' for their massive spending plan, which would lift taxes on corporations and people earning more than $400,000.

Two days after Biden called him to discuss the proposal, he talked to reporters from his home state of Kentucky. It's a fair assumption that the Republicans will oppose it if the Biden administration succeeds in getting it passed, Daily Mail reported.

McConnell, who has been in the Senate since 1985, has worked closely with Biden for decades in the house, and as a 'cardinal' on the Appropriations Committee, he used to drive forward funding programs himself. In addition to vowing to battle the initiative, McConnell didn't seem to hold out much hope for a compromise settlement, despite his bill being packed with programs for roads, bridges, healthcare, drinking water, and workforce training, many of which are financed by tax hikes.

McConnell blasted the proposal as a "Trojan Horse" for tax increases on Wednesday. However, he also hinted that it could contain provisions that favor his state, such as support for the Brett Spence Bridge over the Ohio River. 'Can it be that there's something in there?' 'It may be,' he said, according to WKRC.

The Senate Minority leader raged in a furious speech that former President Trump 'provoked' the Capitol riot. Still, the chamber did not vote to impeach him, and the chamber has reverted to its usual party splits at the beginning of the session. On Thursday, White House chief of staff Ron Klain said he would appreciate Republican support, but Biden would act with or without it.

According to Politico, Senate Minority Leader Mitch McConnell said that President Joe Biden's proposed infrastructure plan would not get Republican votes in the Senate. McConnell allegedly attacked the plan for its possible effect on debt and the associated effort to increase corporate taxes at a Kentucky event.

"As much as we would like to fix infrastructure, the plan that they're bringing together now is not going to get funding from our side," McConnell said. "And I agree the last thing the economy needs right now is a huge tax hike."

Democrats are still limited on the number of ways they will use compromise to approve bills in a fiscal year, though this could be more flexible than previously thought, as per the Business Insider.

Senate Majority Leader Chuck Schumer is looking at a possible loophole that could result in several compromise measures being proposed in the same year, allowing Democrats several attempts to pass one. And the infrastructure plan approved this week will be followed by another in mid-April, which Republicans have shown they will not endorse.

Biden's plan, which includes tax changes and infrastructure spending, as well as a healthcare aspect, is likely to fail as per Politico. The recent White House plan underscores the concept of conflict between the two sides, McConnell said.