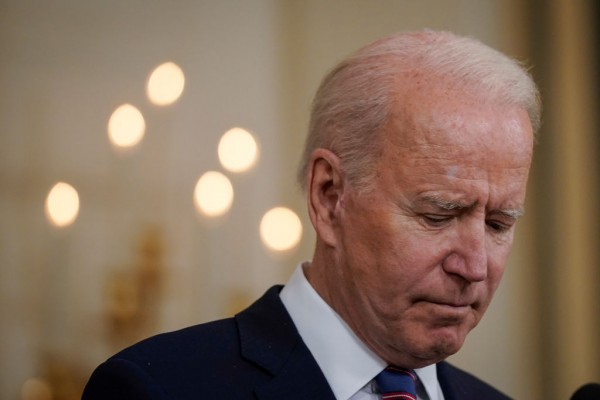 (Photo : Drew Angerer/Getty Images)
President Biden Delivers Remarks On March Jobs Report WASHINGTON, DC - APRIL 2: U.S. President Joe Biden pauses while speaking about the March jobs report in the State Dining Room of the White House on April 2, 2021 in Washington, DC. According to the U.S. Labor Department, employers added over 900,000 jobs in March, up from 416,000 in February.

The case, filed in the United States District Court in Alabama, asks judges to overturn a clause of the American Rescue Plan that prohibits state governments from using the nearly $195 billion of federal funds "to either directly or implicitly cover a decrease in net tax revenue." The prohibition could continue until 2024.

In a statement, West Virginia Attorney General Steve Morrisey, who co-led the case with Alabama and Arkansas, said, "Never before has the federal government undertaken such a complete takeover of state finances. Such overreach would not be tolerated."

The complaint came just two weeks after 21 state attorneys general wrote to Treasury Secretary Janet Yellen, who is listed in the new lawsuit, asking how the administration intended to interpret the law. They asked, for example, whether states would be forbidden from lowering taxes for whatever cause, even if such steps were placed in effect previous to the bill's enactment, or whether the legislation expressly forbids states from using COVID-19 relief funds to offset new tax cuts.

Yellen noted that the legislation is not meant to be a blanket ban on tax cuts, and she indicated that states could reduce taxes without relying on stimulus funds to do so. On March 23, Yellen replied, "Nothing in the Act prohibits States from enacting a broad range of tax cuts. It clearly states that funds collected under the Act should not be used to cover a loss in net tax revenue caused by such state law changes."

On the other hand, Morrisey suggested that the term "indirectly" in the legislation could be read in a manner that forbids states from enacting tax cuts. The case was joined by attorneys general from Alaska, Florida, New Hampshire, Iowa, Montana, Oklahoma, South Carolina, South Dakota, and Utah, NY Post reported.

More funding would be allocated to states with a more significant percentage of unemployed people than the average population at the end of 2020, which has angered some states in the South and Midwest, representing Republican governors and lower unemployment rates. However, several Democrat-led states introduced stringent lockdown policies to stop the pandemic from spreading. Some Republican-led states took a more cautious stance, encouraging companies to stay open for the rest of the pandemic, as per Fox Business via MSN.

According to the Washington Times, President Biden embraced an early victory lap Friday after a solid jobs report. But he said the spike in employment in March wouldn't stop him from pursuing a multi-trillion-dollar infrastructure plan that includes a huge tax hike. "Studies indicate that raising taxes won't slow the economy," Biden said at the White House. "It will make the economy function better," the President claims.

The President referenced a government report that found employers gained 916,000 workers in March, taking the unemployment rate down to 6% from 6.2%. Biden credited his $1.9 trillion COVID-19 relief bill, which was signed into law earlier this month and gave most families $1,400 checks.

According to the President, the employment report shows that his administration had generated more workers than any other in history in the first two months. "But we still have a long way to go," Joe Biden said, stressing that his proposed infrastructure plan would benefit the economy. He says his plan would generate 19 million jobs, ignoring the fact that 8.4 million jobs were destroyed during the pandemic.

Senate Minority Leader Mitch McConnell and other Republicans speak out against the current budget package and potential corporate tax increases, arguing that such a massive tax increase would damage the economy and result in job losses. "If the Republicans say that we don't need infrastructure, Republican voters, I guess, would have a lot to say about it," Biden said.