GOP Senator John Barasso says that Biden officials told him to delete photos of migrants crammed in like sardines at the holding facility. 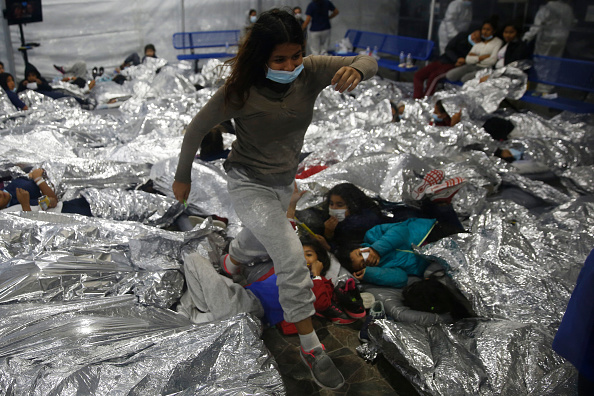 (Photo : Dario Lopez-Mills - Pool/Getty Images)
A minor walks over others inside a pod for females at the Department of Homeland Security holding facility run by the Customs and Border Patrol.

GOP Senator John Barasso said that Biden officials told him to delete the photos of migrants that included the unaccompanied migrant children who were crammed like sardines at the holding facility, according to a published report in the Daily Mail.

According to a published report in FOX News, the GOP Senator was with 18 Senators including Sen. Ted Cruz who went to the border last weekend. However, none of them complied with the order to delete the photos.

Additionally, Barasso said during an interview 'No one did. You've seen the video coming out of all of these kids crammed together under the foil blankets, huddling together.'

Reason of Biden Administration Why Photos Must Be Deleted

In a recently published article in Foxnews, the main reason why the Biden administration told them to delete the photos because they would violate children's privacy. This is even though the photos released were obscured.

Meanwhile, the GOP Senator further said that the situation is both humanitarian and national security. He also described the numbers of migrants as very historical and most of them were unaccompanied children or minors who traveled without their parents.

According to the critics of the Biden administration, the surge or spike of unaccompanied migrants to the border is due to Biden's move to end Trump's policies towards the migrants. However, Pres. Biden denied ad said that his policies were not the cause of the surge.

Unaccompanied Officials To Be Housed at the Military Base in California

The U.S. Pentagon has already approved to allow the Human and Health Services to house temporarily the unaccompanied migrant children at Camp Roberts. But it is still not known as to how many unaccompanied children could be placed at the military base.

Read also: US Military Officials Confirm Pentagon Is on High Alert, on the Lookout for Russian Activities

Border authorities said that they have encountered more than 9,000 unaccompanied children since February. This is so far the highest in a single month since May 2019 where there were 11,000 unaccompanied minors arrived at the border.

Moreover, the unaccompanied minors will be released to their sponsors, relatives, or parents after they are processed by the Border Patrol. On the other hand, adult migrants will not receive the same treatment compared to unaccompanied children.