The U.S. Pentagon gives its approval on Friday to house the unaccompanied migrant children in its military base in California. 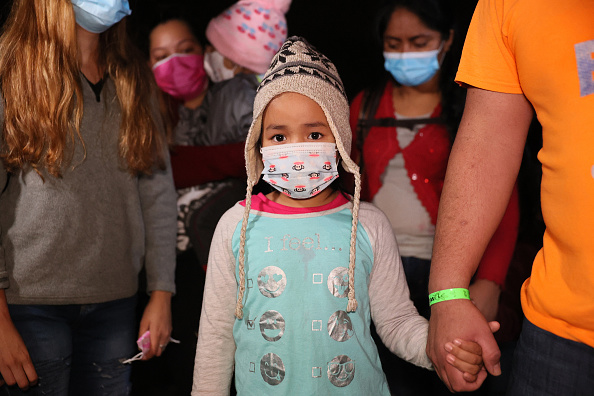 (Photo : Joe Raedle/Getty Images)
A child from Honduras waits with her family and a group of migrants after arriving illegally in the United States after they crossed the Rio Grande in a raft guided by Mexican smugglers.

According to a recently published article in FOX News, the U.S. Pentagon approved on Friday the use of its military base in California to house the unaccompanied migrant children as their numbers continue to surge.

Pentagon's Camp Roberts in California is now the third military base used to house the unaccompanied migrant children. The other two military bases are Fort Bliss and Joint Base in Texas, according to a report in Sioux County Radio.

US Military Officials Confirm Pentagon Is on High Alert, on the Lookout for Russian Activities

Defense Department Approves the Request of Health and Human Services

The Health and Human Services first requested the Defense Department to house the unaccompanied migrant children at Camp Roberts. The military base is located about two hours northwest of Santa Barbara, GNews reports.

An official from the Defense Department said that the DoD approved the HHS request on April 2, which temporarily housed the migrant children at Camp Roberts in California. The official also said, "This support is being provided on a fully-reimbursable basis."

Meanwhile, the official also clarified that the Defense Department only gives this kind of assistance. It does not impact its military readiness and will not compromise its ability to conduct military missions.

According to data obtained by a news outlet, Customs and Border Protection now track the more than 171,000 migrants they encountered in March. It was also reported that the increase was significant compared to the data last year and in February 2021.

Furthermore, the Customs and Border Protection projects around 184,000 unaccompanied migrant children could reach the border before the fiscal year ends. One of the agents in the agency also said that they have never seen these numbers before.

More than 13,000 migrant children are under Human and Health Services' custody, while more than 5,000 under Customs and Border Protection.

Former CBP Commissioner Mark Morgan and Heritage senior research fellow Lora Ries said in a joint statement that the Biden administration continues to refuse to acknowledge the crisis happening on the different borders.

They concluded, "Today's numbers are just more evidence of this undeniable reality - and proof that President Biden's policies are driving this crisis."