Biden Fears for the Lives of Asian-Americans in the US

During his first primetime televised speech, President Joe Biden emphasized protecting Asian-Americans, who have been victims of hate crimes throughout the COVID-19 pandemic. "Vicious hate crimes against Asian-Americans, who have been targeted, threatened, accused, and demonised," Biden said while delivering his speech at the East Room of the White House. Biden added that many Asian-Americans are on the pandemic's front line to save lives while fearing for their own lives. "It's wrong, it's un-American and it must stop." 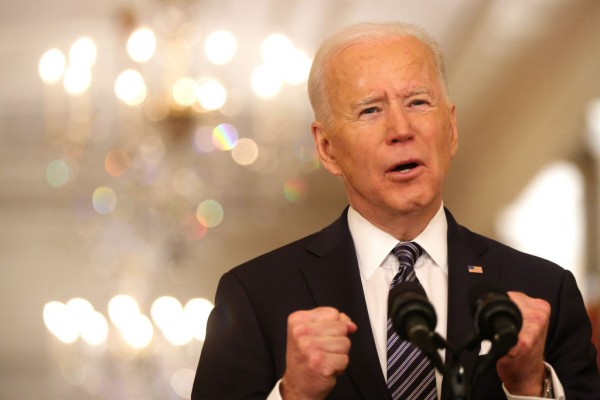 (Photo : Alex Wong/Getty Images)
WASHINGTON, DC - MARCH 11: U.S. President Joe Biden delivers a primetime address to the nation from the East Room of the White House March 11, 2021 in Washington, DC. President Biden gave the address to mark the one-year anniversary of the shutdown due to the COVID-19 pandemic.

Biden's remarks came only one day after his predecessor, Donald Trump, in a tweet that sought credit for the rapid growth of COVID-19 vaccines, once again used the racist word "China flu." On day 6 of his administration, the President signed an executive order titled "Memorandum Condemning and Combating Racism, Xenophobia, and Intolerance Toward Asian-Americans and Pacific Islanders in the US," to put an end to the use of the word.

After the address, Republican Maryland Gov. Larry Hogan, whose wife is Korean-American, applauded Biden's sentiment. Hogan tweeted that his family appreciated Biden's remarks condemning the rise in hate crimes against Asian-Americans and included a snapshot of his mixed-race family. "It is truly 'un-American,' and it must come to an end."

Stop APPI Hate announced in February that from March 19, 2020, to the end of last year, it received 2,808 firsthand reports of anti-Asian hatred from 47 states and Washington, D.C.

According to his relatives, in January, an 84-year-old Asian-American man was killed in a racially targeted attack in San Francisco. Meanwhile, the video of 19-year-old Antoine Watson slamming Vicha Ratanapakdee to the ground went viral, Daily Mail reported.

According to The Hill, Biden addressed the grim reality of a year of pandemic and lockdown during his first primetime speech as president from the White House, saying that every American has suffered some loss. The president went on to say that while members of the AAPI group in the United States serve on the front lines of the pandemic every day, they also fear for their personal safety going down the street in the country.

According to NBC News, violent attacks against Asian-Americans increased by nearly 150 percent last year in major cities, especially New York City and Los Angeles. Violence against Asian Americans and Pacific Islanders increased after the coronavirus pandemic, thought to have arisen in Wuhan, China, and reached the United States in early 2020. After the COVID-19 pandemic started, more than 3,000 hate crimes against the AAPI community have been recorded, which Democratic lawmakers and community leaders claimed are related to politicians' anti-Asian rhetoric.

Between 2019 and 2020, police in major cities across the U.S. have seen an increase in Asian-targeted hate crimes. Last year, the NYPD's hate crime task force reported 28 anti-Asian assaults compared to only two in 2019. Based on the data gathered by the Center for the Study of Hate & Extremism in California, Los Angeles had 15 cases in 2020, up from seven in 2019, and Denver had three attacks, the first in six years, as per the NY Post report.