Biden on Infrastructure: Can He Accomplish What the Two Former Presidents Failed to Finish?

President Biden is turning his attention away from the coronavirus to his next political fight, planning to lay out a recovery agenda that includes major improvements in rebuilding the United States' infrastructure.

Biden prepares to push for infrastructure in the US 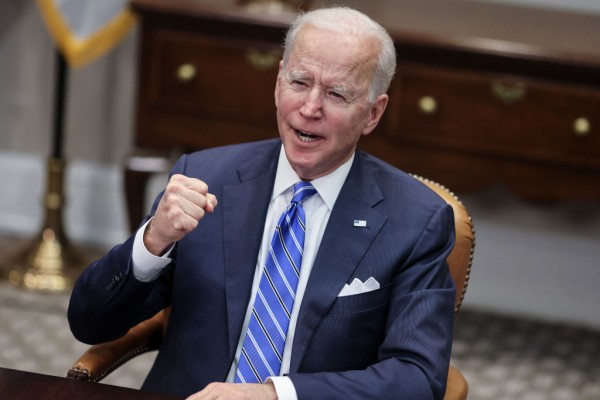 (Photo : Oliver Contreras-Pool/Getty Images)
WASHINGTON, DC - MARCH 04: President Joe Biden speaks during a virtual call to congratulate the NASA JPL Perseverance team on the successful Mars Landing in the Roosevelt Room of the White House on March 4, 2021 in Washington, DC.

On Thursday afternoon, Biden met for over an hour with Transportation Secretary Pete Buttigieg and a bipartisan group of members of the House Transportation and Infrastructure Committee. That was his second meeting with the group in the last month.

After the Senate approves the $1.9 trillion coronavirus relief package, which the chamber took up on Thursday and would approve by the weekend, the president is scheduled to lay out his "Build Back Better" recovery agenda. Though the White House has been tight-lipped on the recovery plan's specifics, it's expected to echo at least somewhat Trump's $2 trillion infrastructure and climate plan, including a sizable infrastructure investment to boost job growth.

According to The Hill on MSN, the meeting on Thursday was characterized as fruitful by lawmakers from both parties. But it remains to be seen if Biden will use his congressional authority to usher in bipartisan compromise on major legislation. Former President Donald Trump campaigned on a promise to invest heavily in improving America's infrastructure, but he never followed up on it while in office.

The White House readout of the conference states that participants discussed their mutual commitment to working across the aisle to develop new and resilient infrastructure in rural, suburban, and urban areas that create good-paying, union employment supports the economic recovery.

Ranking member Sam Graves (R-Mo.) called the meeting an "icebreaker" and said he expects the conversation to proceed, but he added that no timeframe for Biden's plan had been addressed. Biden made it known, he added, that he preferred to negotiate a compromised infrastructure package. Graves said in a phone interview with The Hill, "I thought it was good, it seemed to be productive. The president was very engaged and very open. Nobody got into any fights."

Republicans are divided about the high cost of an infrastructure bill, which may raise corporate tax rates and the climate change aspect Republicans, according to Graves, did not want the plan to be a climate bill with a few transportation programs thrown in. Graves added that.

Can Biden get infrastructure done?

Republicans suppressed President Obama's efforts to reform the nation's infrastructure. President Trump proclaimed it to be "infrastructure week" so often that it became a standing joke, but he refused to pass legislation. Now, willing to take risks, President Biden thinks he will achieve where his predecessors failed, The Los Angeles Times via Yahoo reported.

After Congress sent him the $1.9-trillion coronavirus relief plan this month, Biden made known that he plans to work on another multibillion-dollar legislative package - the next one a major building program along the lines of FDR's federal works projects of the 1930s. Both major political parties have advocated for improving the country's highways, roads, airports, rail lines, telecommunications networks, and power grids for years.

The power outage in Texas last month, which left millions of residents without running water or electricity, highlighted the need for action. Just this week, the American Society of Civil Engineers issued its report on the nation's infrastructure, awarding it a C-minus - an upgrade over last year's D - and indicating that new federal investment is long overdue.

In a meeting with Joe Biden on Thursday, a key House Republican told him that the president's proposal to restore America's infrastructure would lose GOP support. This is if it contributes to the debt or provides insight into problems other than roads and bridges, such as developing renewable energy sources, as per Bloomberg.

The statement is an alarming sign for Biden, who is unlikely to succeed with his "Build Back Better" plan without at least some Republican support, especially in the Senate. The president met with a bipartisan group of eight lawmakers on Thursday, including Graves and Oregon Democrat Peter DeFazio, the Transportation Committee chairman.