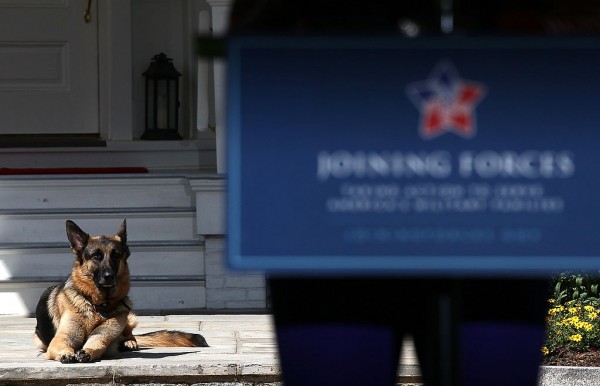 (Photo : Win McNamee/Getty Images)
WASHINGTON, DC - MAY 10: Vice President Joe Biden's dog, Champ, lays down during speechs during a Joining Forces service event at the Vice President's residence at the Naval Observatory May 10, 2012 in Washington, DC. U.S. first lady Michelle Obama and Biden joined with Congressional spouses to assemble Mother's Day packages that deployed troops have requested to be sent to their mothers and wives at home.

According to sources familiar with the situation, the two dogs were returned to Delaware following a "biting incident" with a security agent whose health is unclear. Major, a three-year-old dog, rescued from a shelter by the Bidens in 2018, is said to have acted violently against White House workers in the past, including barking, climbing, and "charging." Champ, 13 years old, has "slowed physically due to his advanced age," CNN reported. Sources revealed the dogs' present position in Delaware, citing "a person familiar with the dogs' schedule," but they did note they have been known to stay there with minders while the first lady is abroad.

After four pet-free years under Trump, Champ and Major moved into the White House just days after Biden's inauguration. The first shelter dog to live in the White House, Major, made history. According to reports, in November, the then-president-elect broke his foot while playing with his dogs, slipping on Major.

Who are President Biden's dogs?

Champ and Major, President Joe Biden's two German Shepherd dogs, returned to the White House this year after four years without a first pet under Donald Trump's presidency. Biden told ABC in 2008 that he had German Shepherds since he was a kid, and he trained and showed them in the past.

Champ was a 3-month-old puppy when the then-vice president adopted him in 2008, as per Newsweek. He met up with the Bidens at Number One Observatory Circle, the vice president's official residence on the United States Naval Observatory grounds.

Champ was said to have taken his responsibilities seriously. Biden said, "He feels he's Secret Service." Biden's granddaughters chose his name in honor of a slogan the president always learned from his father: "Anytime you get knocked down, champ, get back up!"

Why Joe Biden sent his dogs back to Delaware

President Joe Biden, 78, was sworn in as president in January, and this is his third month in office. Joe and his wife Jill moved into the White House after his inauguration, which is usual with a US President.

Their two dogs, both German Shepherds, accompanied them on their trip from Delaware to Washington. On the Kelly Clarkson Show last month, Dr. Jill Biden, 69, discussed acclimating the dogs to their new home.

When the first lady is not in Washington, the dogs are said to remain with dog sitters in Delaware, although it is unclear if this is the case. According to Daily Express, Jill Biden is now visiting military bases in Washington and California for two days. In Greenville, Delaware, the Bidens' house resides on four acres of lakefront property and is valued at about $2 million. A house on the Delaware Shaw overlooks Cape Henlopen State Park, and the couple also owns a house on the Delaware Shaw.