Jill Biden Shares Nightly Dates with President Joe, Gives Advice to Clarkson on Getting Over a Painful Divorce

First lady Jill Biden shared how having a nightly dinner date with President Joe Biden, although their busy schedules make them a better couple.

Jill Biden makes time with the President despite busy schedules 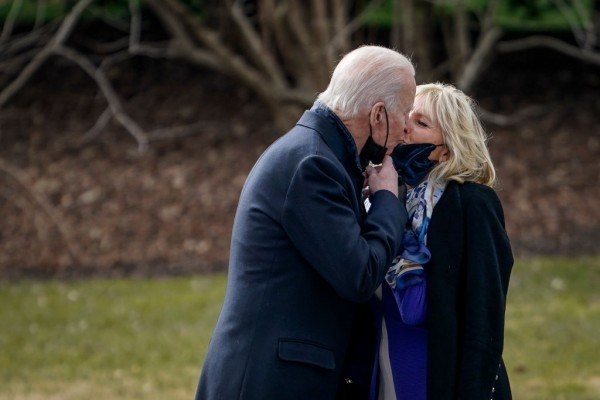 Jill revealed at a special episode of "The Kelly Clarkson Show" that she and President Joe Biden were so busy, ut they kept dinner together with no phones. "We just sit and talk for awhile, and he has to go back to work into the night and I'm grading papers," she said.

In addition, the Bidens still make sure to have dinner with their children on Sunday night, ET Online on MSN reported. A daughter, 39-year-old Ashley, is shared by the president and first lady, while the president is also the father of Hunter, 51, and Naomi as well as Beau, who died in1972 and 2015, respectively.

During the conversation with Kelly Clarkson, the first lady also touched on how she fought to find faith after Beau died due to cancer. Jill said about losing Beau when he was 45 years old that she prayed so hard every day, hoping that he would live. "I felt like he was such a special person and that God would let him live. I just prayed and prayed."

She continued adding that "it was just not meant to be." Besides, it was hard for her to keep her faith as she strongly believed in prayer that Beau could make it, she said.

Jill continued that it was almost six years ago and that she was in church one day, and a lady walked up to her and said, "Jill, I want to be your partner in prayer." The two would have phone calls where they would talk together without knowing what it meant, and they talk on a weekly basis with each other up to this day. She expressed that it was what helped her find her faith again. "I felt like that was a gift she gave me."

Some wise advice on getting through a traumatic divorce from none other than the First Lady of the United States has been given to Kelly Clarkson. As a guest on Kelly's self-titled talk show, Jill Biden appeared where the pair shared a deep heart-to-heart talk about relationships and recovery from broken unions, as per Mirror via MSN.

In June of last year, Kelly, 38, filed for divorce from her seven-year husband, Brandon Blackstock, after deciding she needed to end their marriage. First Lady Jill offered a piece of personal advice as Kelly Clarkson seeks advice on the best way to heal from ill-fated marriage, especially now that Clarkson will co-parent her two children with Blackstock. Elsewhere, when co-parenting their two children, daughter River, six, and four-year-old son Remington, Clarkson commented on her own marriage to Brandon as she now directs her way through the divorce.

Read also: Larry King Omits His Widow from His Secret Will; Shawn King to Contest

Jill Biden blames herself for her divorce from her first husband

After her first partner's divorce, First Lady Jill Biden admits she felt like a 'failure,' saying she figured there was something 'wrong with her' because she couldn't make the relationship work.

For her first solo television interview as First Lady, the 69-year-old sat down with popstar and daytime host Kelly Clarkson. She discussed the breakdown of her marriage to Bill Stevenson, which ended after five years in 1975.

But while the professor acknowledged that she blamed the divorce on herself, she said she did not know her second spouse, Joe, until after the break-up, despite her ex-husband telling DailyMail.com that the two had an affair that eventually ended his life.

Read also: Peter Weber, Kelley Flanagan: Fans Strongly Predict They Will Get Back Together