On Monday, the Biden Administration announced that an estimated 320,000 Venezuelans who left their home country would be granted temporary protected status, enabling them to remain and work in the United States legally. 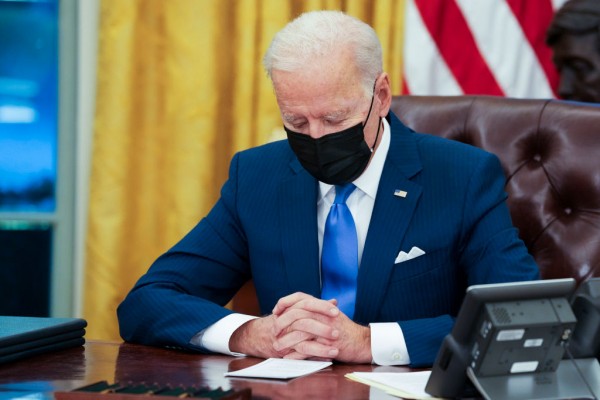 According to a senior administration official who demanded anonymity, Venezuelans' acceptance into the program will obtain conditional immigrant status for 18 months. They'll have to register over the next 180 days, pay a fee, show they've previously lived in the US, and pass a background check, Bloomberg via MSN reported.

The transition fulfills a campaign pledge made by President Joe Biden. It is meant to signal a step away from President Donald Trump's administration, which deported Venezuelans for years while condemning President Nicolas Maduro's leftist government. Democrats claimed that Trump's tough immigration policy showed a lack of concern for Venezuelans, who have faced a harsh humanitarian crisis since the country's economy crashed.

In the coming days and weeks, the White House intends to study policy decisions made by former President Donald Trump, CBS News reported. According to the United Nations High Commissioner for Refugees, there are reportedly 5.4 million Venezuelan refugees and migrants worldwide.

Thousands of migrant children are backed up in US processing centers along the Mexican border, part of an increase of immigration from Central Americans fleeing hardship and crime that threatens President Biden's efforts to establish a more humanitarian solution to those seeking entry into the US.

The federal immigration service records collected by The New York Times say that the number of migrant children in custody at the border has soared in the last two weeks to more than 3,250. Many of them are being kept in jail-like conditions for longer than the three days permitted by law.

The government faces two challenges: the number of minors crossing the border and what to do with them until they are detained. The children are expected to be moved to shelters operated by the Health and Human Services Department under the legislation. Still, due to the pandemic, the shelters could only hold a limited number of children until last week.

The rising number of unaccompanied minors is just one aspect of an emerging border crisis. In January, border agents met a migrant at the border 78,000 times, more than twice the average from a year earlier and more than every January in the last decade.

According to people familiar with the agency's new numbers, immigration officials are due to report this week that there were nearly 100,000 apprehensions in February, including encounters at port entries. Since March 1, border agents have arrested an additional 19,000 migrants, both adults, and children.

The scenario resembles the huge surge of migrant children that flooded detention facilities in 2014, just before President Donald J. Trump's crackdown. Biden, a vice president at the time, visited Guatemala seven years ago and announced that "the present situation is untenable and unsustainable."

The President has advocated reforming the country's decades-old immigration system by making it simpler for asylum seekers and migrants, widening legal routes for migrant workers, expanding family-based immigration options, and significantly reducing the possibility of mass deportation. According to his State Department, foreigners rejected after January 20, 2020, under Trump's travel ban, can apply for a visa without paying extra fees.

However, his approach - to reopen the country's borders to vulnerable children in what he hopes will be an accommodating alternative to Trump's construction of legal and physical barriers - is already threatened by the grim realities of migration trends that have roiled the world for years. Migrants are again fleeing poverty, violence, and the destruction left by hurricanes and turning north into the United States, sensing a shift in tone and approach.